As we’ve reported, Apple sold 5.2 million iPhones last quarter. Yeah, Cupertino sure doesn’t seem to think much of the recession. Oh, and to top it off, they sold 10.2 million iPods. Assuming at least some of those were iPod touches, there are at least 6 million new iDevices in consumer’s hands. In fact, CNNMoney.com estimates that there are now 45 million App Store-capable devices on the market. No wonder, day after day, we see new developers creating iPhone apps, and old ones decide to dedicate more resources to the charge. This week, in our weekly App Roundup we continue to explore the depths of the App Store and try to help you separate the good apps from the bad. 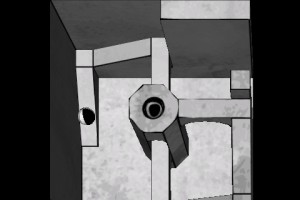 App #1 – Diorama: Strap on those 3D goggles and brace yourself for the coolest experience you’ve had with your iDevice yet. Diorama is an absolutely incredible ride, a truly 3D game that utilizes the iPhone’s accelerometer brilliantly. Download this game now (iTunes link) and procure a pair of stereoscopic glasses (yeah those funky paper/plastic looking bifocals with cyan and magenta-colored lenses) pronto. Just like any other labyrinth game, Diorama utilizes tilt sensitivity (quite well, I might add) to allow you to control a virtual marble and guide it to its destination. Though you can play without 3D glasses, if you do obtain a pair (for nothing more than a self-addressed envelope), you’ll see the entire level pop out at you. Dromsynt, the game’s creator, is offering you this amazing iPhone gem for just $1 – a steal in my opinion. 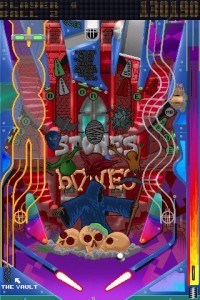 App #2 – Pinball Fantasies: When I first took a look at this game, my gut reaction was: “What the hell? $6 for a pinball game? With just 4 different tables? You’ve got to be kidding me.” And nothing in this game ever changed my mind. Made by Cowboy Rodeo, this is what you call an App Store rip-off. Sure, the art is great: and hats off to the game’s designer. But, even the pinball game that came free on every Windows machine alongside Minesweeper and Solitaire had better gameplay than this does. Of course, those of you who have unfettered allegiance to the original Amiga pinball arcade game that Pinball Fantasies is based off of, you’re probably rolling around in your grave right now. As for me, I can’t justify spending $6 on a simple game of pinball. Unless you’re craving for the old Amiga pinball game, stick the cash back under the bed. 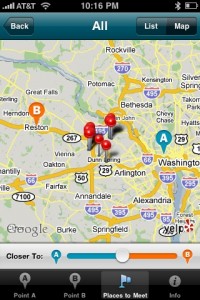 App #3 – MeetMe: This app couldn’t have come to me at a better time. Lately, for whatever reason, I’ve been having random lunches and dinners with old friends or colleagues and can never figure out where to meet up. So, naturally, I was excited when I received an app (iTunes link) that would suggest hang out locations that are in-between myself and my friend. Plug in your location and your friend’s location and then the app pulls suggestions from Yelp for what you could do that is reasonably spaced in-between the two of you. Great idea, and the app works pretty well. I had some issues at my apartment (which overhangs a river and confuses most GPS devices), but otherwise the app worked great. I could choose whether I wanted food, nightlife, shopping, etc. (all of the Yelp “categories”) and then slide a marker to decide if we were going to meet closer to my buddy or my place (mine). Definitely useful, but for $2, it wouldn’t surprise me if most people just decide to go without it. 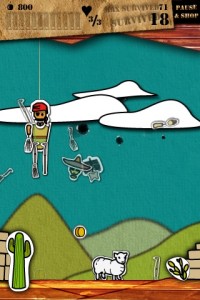 App #4 – Zombies vs. Sheep: Sometimes the production value of Zombies vs Sheep (iTunes link) fools you. And this game has solid graphics and awesome music, so it definitely has some solid pros. But the gameplay is nothing special. It’s a simple shooting gallery with little else to it. You are a sheep and you tap on the screen to try and shoot the zombies (or other targets). Tilt the iPhone left or right to move the sheep to gather the coins that fall when the zombies die. The game is mildly entertaining, but at the end of the day: it’s no different from any other shooting gallery game. The one twist is that you can upgrade your sheep to make it faster, increase its ammo, improve its health, etc. It is a welcome addition, but doesn’t really change the quality of the game much. So, if you want to tap away at the screen and re-enact the days of walking into an old-school arcade and shooting at the cow’s tail with a fake gun, this might be worth your while. If this sounds like it might tickle your fancy, go for it: it’s only a $1. 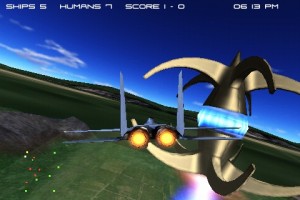 App #5 – MetalSun: Brought to you by a small indie developer, Silver Machine Games, this game isn’t available in the US yet. But we had a chance to look at it and aren’t surprised. Frankly, the game didn’t even come close to hitting the mark. It is a 3D dog-fighting game in which you use tilt motion controls to steer a fighter jet and try to fend off freaky-looking alien spacecrafts. You start by flying in a peaceful countryside with rolling hills and green grass, and it seems like your standard dog-fighting game with average graphics and decent controls. Then, you start playing and realize that funky-looking structure floating in mid-air is actually an enemy aircraft. As you start firing your gun at the alien ship, you see what looks like fireworks going off everytime you hit the enemy. Yeah, the game goes from being a potential success to an instant failure as soon as you get into combat. The alien ships look like something out of a quirky futuristic carnival game, and the rest of the combat graphics are equally laughable. Also, the controls get harder to use as the game goes on: shooting is a bit off and you can’t really control the aircraft as well as I’d like. Bottom line: no need to get excited about this one, but if you’re looking for a great dog-fighting game, check out F.A.S.T.

If you have an app worth checking out, shoot us an e-mail at gaganATcrunchgearDOTcom (with the obvious substitutions in place, of course).