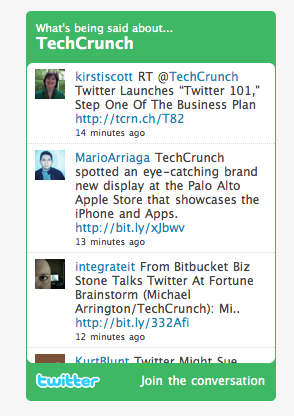 Twitter Search is great. Unfortunately, unlike FriendFeed’s search, it doesn’t update live in real-time. Sure, for some searches, that would be annoying. But it’d be nice to at least have the option to watch a stream of incoming tweets without having to hit the refresh button. And Twitter has just unveiled a way to do that, with a new widget.

The widget, found here, allows you to enter any search query, along with a title and a caption. The widget will then be built next to the input fields so you can see what it looks like. You can also edit its color and dimensions. If you like it, you simply grab the code and put it on a webpage. From there, it will continuously update in real-time with new results from the query you set.

You can even do more advanced searches using parameters like “OR”. In their example widget, Twitter uses the following search string “San Francisco OR @sf OR #sf” to make a live-updating San Francisco Twitter Search widget. And you can also loop old results if you’re doing a search for something that will have a low volume of tweets, so the widget doesn’t appear so static.

There are no shortage of third-parties that do widgets like these, but an official Twitter one will no doubt be useful to many people for events or personal use. It’s not quite the useful “track” functionality that Twitter used to have (which would ping you when a keyword you were searching for was said), but it’s getting closer.

We made one of these real-time widgets for TechCrunch, but the code you get doesn’t appear to work too nicely with WordPress posts, so the picture will have to do for now. This new feature follows Twitter rolling out its “Twitter 101” guide for businesses to use the service earlier tonight.