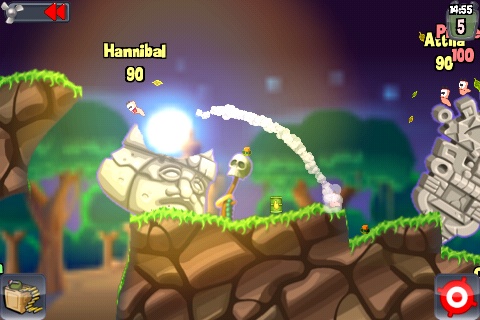 Team17 completely blew it with Worms for the iPhone (iTunes link). I was running around the house screaming my head off like my team had just won the Super Bowl when I found out Worms was coming to this handset. When I finally got to playing it, it was as though the clock was reset to 0:10 left and the opposing team just hit a last-minute field goal, crushing my hopes and dreams. That’s not to say the game didn’t have its pluses – it’s still Worms after all. But I will say that the game was riddled with various performance issues, drawbacks and inconsistencies that will undoubtedly infuriate any Worms fan. Those who never enjoyed the classic turn-by-turn strategy series known as Worms: stay away from the iPhone version. Stay far, far away. For people like me, who long to relive on the iPhone their childhood love affair with the eccentric, class-less, and addictive Worms franchise: approach with caution. You may still find yourself enjoying Worms, but will constantly find yourself frustrated by its shortcomings.

I tried Worms on the iPhone 3G, which is no doubt still the predominant platform for iDevice owners. As soon as I opened up Worms, I immediately noticed a severe lag. I reset my phone, and though there was a marked improvement, the lag never really subsided enough for a seamless gaming experience. The Team17 Facebook forum is abuzz about these issues as well, so I’m not the only one with the problem. The issue really affects specific parts of the game, which require speed and are adversely affected by the lag. 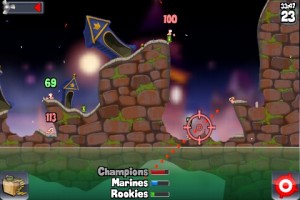 For those of you who don’t know Worms: it is a turn-based strategy game in which you are a squadron of cartoon earthworms and your goal is to use an arsenal of guns, bombs, artillery and special weapons to destroy the opposing squad(s) of Worms. You and the enemy’s worms are dispersed throughout the 2-D battlefield (usually at random) and you take turns trying to destroy each other. Each turn, you control one worm and you have a limited amount of time to inflict maximum damage. Firing a weapon or getting hurt (by falling too far) also end your turn. In the iPhone version, you touch the sides of the screen to move (left or right) and tap the bulls-eye button to shoot/use a weapon. You tap on the worm to jump, double-tap to backflip, slide the crosshair to aim, and click on the ammo button on the bottom-left to change your weapon. Worms is well-known for its special weapons, such as explosive sheep, ninja ropes to scale walls, jetpacks to fly and air strikes to kill your enemies from afar. You control the power of your shot (or throw, if it’s a bomb) by holding on the fire button. By taking into account the wind, trajectory and power, you can carefully fire your bazookas or bombs so that they blow the enemy worm to bits. It is an endless ride of destructive delight, and the Worms franchise has become a household name amongst most gamers.

The hallmark of the PC version of Worms is, without a doubt, the online multiplayer functionality. And that is exactly what the iPhone version lacks. There is no online, WiFi or bluetooth multiplayer (though online is what we really care about). The only multiplayer is local, and it isn’t really that good anyways. Unlike the traditional PC multiplayer, the iPhone version doesn’t afford the users a lot of choice: you don’t have the option to keep certain weapons and eliminate others; you can choose sets of weapons such as “guns only,” but there is no item-by-item customization. You also can’t place your worms (they are placed for you randomly). 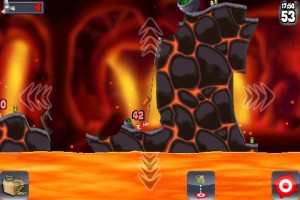 Though the lack of multiplayer was a MAJOR sticking point, the worst of all was the aforementioned performance issues. The lag affected everything: I couldn’t backflip unless I tapped the screen four times (instead of two). It took forever to load, and the music/graphics were extremely sluggish. Most importantly, I found it difficult to move the crosshair to the exact position I wanted: this is where real-time matters most, because if the crosshair doesn’t move as my finger does, then I don’t know whether I’ve gone too far or too short. Whether it was just a simple bazooka shot or a long-distance air strike, I lost countless easy kills because I couldn’t aim my crosshair before the time ran out. Though not a performance issue per se, the controls were also wonky. The ninja rope was useless for climbing over things (usually, if you do it right, you can use the ninja rope not just to go to higher ground but also to get on the other side of tall objects). The jetpack controls were subpar as well–I just didn’t have the same handle on the iPhone Worms as I did on the computer. And that isn’t becaues there was no mouse: I’ve played enough games on the iPhone that effectively use on-screen controls and the touchscreen to accomplish similar tasks to the ninja rope or jetpack. Zoom was also affected by lag: sometimes I spent a full 30 seconds just trying to position my screen so I could see my target and the worm I was controlling. 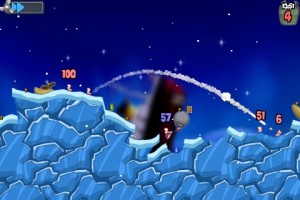 OK, now for a positive. Admittedly, the single player mode is pretty fun, and extremely deep. With 50 levels, I could spend days trying to beat them all. As long as you have a 3GS (assuming it works better on one; I didn’t test that), the game’s $5 price tag is totally worth it just for the single player. The AI acts like it’s taken a few drugs: even in the most difficult levels, the worms occasionally fire into the middle of nowhere or even shoot themselves if put in a tough spot. That criticism aside, you’ll get addicted to the levels: there are SO many and after the first 15 (which are way too easy), they start getting awfully challenging. 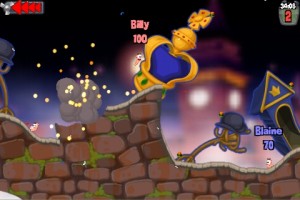 The graphics, screen text and sound effects are all classic worms (with less variety, of course). Solid graphics with a good number of diverse maps–each with four options: fully-enclosed (the worms are surrounded on all four sides with land), ceiling (land above and below but not on the sides), open with multiple islands, open with one large island. The game is full of quips like “Jiffy is off in search of Atlantis” or “Glibb went swimming with the fishies” and a variety of character voices (English, Rastafarian, Angry Scots, Alien, Guerilla Warfare, etc.). Again, all of this is more limited than other versions of Worms, but there is still enough to supplement the gameplay with a welcome dose of light humor.

But you can’t make any excuses for a venerable game developer like Team17. To the developers: you have a name to live up to, and your iPhone port just plain missed the mark. No online multiplayer? The worst performance on a game I’ve seen to date? No full customization of weapons, team size, and worm placement in the multiplayer mode? Worms for the iPhone was just a complete and utter disappointment; there’s no doubt about that. For $5, on a 3GS, we understand if you can’t help but try it yourself. As for us, we’ll wait until they fix the performance issues and add some online multiplayer before we can stand behind Worms.