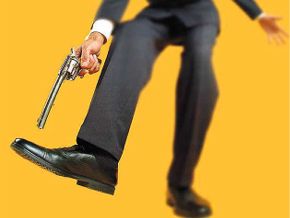 Since originally launching last April, Digg’s URL shortening service DiggBar has been marred with controversy, though things have mostly died down over the last few months. Now it looks like Digg has made a change to the service that will alight the web’s flames of fury anew, and this time their actions have moved from irritating to downright shady.

The change is a subtle one, but it will have major implications. Typically when you use a link-shortening service, anyone who clicks on your shortened link will be sent directly to the original article that you’ve linked to, without any landing page or barrier in between. This is how nearly every single link shortener works, from Bit.ly to Awe.sm, and up until now DiggBar worked basically the same way, though it inserted a frame at the top of the page.

But sometime in the last few days DiggBar has changed this core functionality: clicking on a DiggBar shortlink will send anyone who isn’t already logged in to Digg to Digg.com’s list of comments about an article rather than the article itself. So, if I linked to TechCrunch.com using the DiggBar, users would first have to go to Digg’s page about TechCrunch.com before they could actually make it over here. In short, this is totally ridiculous.

It’s not hard to guess why Digg would want to make the change — every single non-member to click the link is being sent to Digg.com, which means the site is going to get new users and a big traffic boost. But it totally kills the user experience. As someone sharing a link, I would never want to force them to jump to a landing page before they could see what I was trying to share. It just leads to too much confusion, not to mention the fact that it’s incredibly irritating. And I’m not the only one to feel this way — famous Digg user MrBabyMan is reportedly bashing the change, as are other top Diggers. Digg may have just boosted the amount of traffic it gets from DiggBar, but it may have killed DiggBar itself in the process.

This isn’t the first problem users have had with the DiggBar service. Soon after its launch, there was an uproar over the way it handled its redirects (it used a 200 code rather than a 301), though it soon reached a compromise. Since then the uproar has died down, though most website owners aren’t too happy about the fact that a site linked to using DiggBar effectively hides the original source URL (yes, you can still see it, but not in the address bar where it normally is).

This underlines one of the biggest problems with URL shorteners: you’re basically adding another layer of indirection on the web — something that Delicious founder Joshua Schachter says contributes to making the services downright evil.

There’s still a chance that this was a bug or mistakenly enabled, though our tipster says that Digg has confirmed that it is working as intended. We’ve contacted Digg directly, but they have yet to respond.

Update: The backlash has already begun. Tweetie developer Loren Brichter just tweeted that he would be pulling Digg support from the popular Mac and iPhone client if it doesn’t change things back soon.

Update 2: Digg founder Kevin Rose has tweeted that he didn’t know that the change was going live, as he has been on vacation for the last two weeks. Don’t be surprised if we see this switch back very soon.

Thanks to JD Rucker for the tip.