Ever wanted to see where your city’s highest concentration of frisky, mature Cougars was located? How about a list of locations in town that offer free meals when it’s your birthday? Two ex-Googlers have quietly launched a site called TownMe that’s looking to answer these questions and more. In fact, the site is aiming to become a comprehensive guide to pretty much everything that’s relevant at the local level, from restaurant reviews to the best schools and hospitals in town.

Co-founder Elad Gil says that TownMe is still in “very, very early stages”, so there are still many features to come, but the core of the site seems to be in place, with local reviews and guides available for plenty of restaurants and events like San Francisco’s street fairs. The variety of topics covered is fairly broad, though at there are still a modest number of reviews.

While Gil ackowledges that there are other major sites like Yelp in this space, he points out some key differences. The site aggregates data from across the web, and also accepts user-submitted content. But instead of presenting a list of reviews submitted by individual users, the site is using a group-edited Wiki system, with a lengthy overview describing a certain establishment (there are still shorter, Yelp-style reviews with a star rating and comments beneath the Wiki). Gil says that the site also has a broader focus, and looks to offer entries that are more detailed than a Yelp review. For example, he points out that if you were to look up “Golden Gate Bridge” on Yelp, you’d be hard pressed to find a listing of the best locations to shoot a photo from or which landmarks to look out for.

The site also leverages an array of publicly available information like census data and hospital ratings. For example, there are options to see a map with an overlay of the highest concentration of ‘Yuppies’ (young professionals who make $100,000 or more) or ‘Cougars’ (defined by the site as women aged 35-50 who are single or divorced). Obviously some of these are mostly for fun, but they can definitely come in handy, especially when you’re trying to price out different neighborhoods.

The Wiki system is working pretty well so far, but I’m worried about some of the problems that will arise as more people use the site. For one, most people don’t always agree on which restaurants or events are really ‘must-see’, which means that entries might skew towards being overly vague instead of singling out spots to eat. And if TownMe does begin to start gaining substantial traction, it would be trivial for restaurant owners to simply add their establishments to the page, which sort of defeats the point. That said, the site is still in early stages, and has plenty of time to fine tune its moderation systems.

All in all, TownMe is off to a great start, but it’s going to have a long road ahead of it: there are already some big players in the space, namely Yelp, which has become an excellent resource for getting reviews on local restaraurants and activities. Aside from Yelp, TownMe is going to see competition from a number of other sites, including Diddit, WikiTravel, and even MySpace, which launched MySpace Local in April.

TownMe was founded by Elad Gil, a former PM at Google who worked on AdSense and Google Mobile; and Othman Laraki, a Google PM who ran Google Toolbar and Gears. 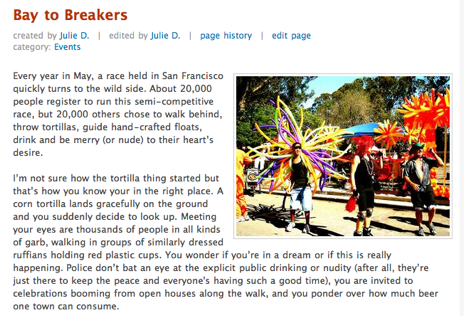