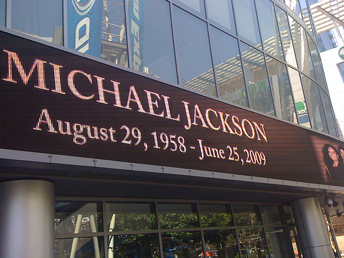 In news that should come as a surprise to absolutely no one, Michael Jackson’s sobering memorial service this morning will go down as one of the most watched web events, ever. As we reported earlier, the social web was well prepared for today’s ceremony, with sites including MySpace, Ustream (in partnership with CBS), Facebook (in partnership with CNN), and Hulu offering live streams, most of which also allowed viewers some way to interact with each other.

It’s still a little too early to determine just how widely watched the ceremony was, especially since traffic was distributed across many sites, but we’re already beginning to see some staggering preliminary numbers.

In the time window from 12AM to 4PM EST, Web analytics company Omniture reports that CNN saw:

Update: Facebook has sent us their finalized stats, taken from all partner sites that integrated its stream of real-time updates. In total, the social network reports that 1 million users posted approximately 800,000 status:
CNN:

Very impressive numbers to be sure, but they don’t surpass those of President Obama’s inauguration, which was the last web event to draw this much attention from the social web. During the inauguration, the CNN/Facebook live stream drew 13.9 million live streams between 6 AM and 11:45 AM ET, with millions more during the course of the day, and a peak of 1.3 million concurrent streams.
Photograph by xero79