One thing I hated about being a corporate lawyer at Wilson Sonsini back in the day – we got to work on really cool deals (the last deal I worked on before leaving for a startup was the AOL/Netscape merger), but we were only brought in at the very end to paper everything. We fought over the fine print in the contracts after the meat of the deal was ironed out by CEOs. Skinning and dressing whatever the hunters bring back to the cave is fine for some people. But it’s not exactly being in the middle of the action.

PR firms today aren’t much different than corporate lawyers. They are paid to perform a service. They like to think of themselves as core to the strategic action of their clients. But more often, they’re just there to spin whatever happened in the most favorable light possible. Then they smile and dial and pray for coverage. Occasionally they are called in to smother a story, which is mildly more exciting, I imagine. But when a CEO is wondering what she should do next to drive her business forward, she generally doesn’t call her PR firm for advice. Or at least I hope she doesn’t.

PR firms are apparently just as frustrated by always being in the back seat as the law firms are.

I’m fascinated by Claire Cain Miller’s article in the New York Times today about PR in general and the birth of a startup, Wordnik, specifically.

Forget the tech blogs, said investor Roger McNamee. Brew PR head Brooke Hammerling instantly acquiesced, and decided to go with a sort of guerrilla approach instead by “whispering” into the ears of prominent Twitter users like Kevin Rose, Jay Adelson and Jason Calacanis. CNET was also given the story, but it managed to eek out only a single comment.

Ms. Hammerling, while popping green apple Jolly Ranchers into her mouth, suggests a press tour that includes briefing bloggers at influential geek sites like TechCrunch, All Things Digital and GigaOM.

But Roger McNamee, a prominent tech investor who is backing Wordnik, is also in the room, and a look of exasperation passes across his face at the mere mention of the sites.

“Why shouldn’t we avoid them? They’re cynical,” he says, also noting his concern that Wordnik would probably appeal more to wordsmiths than followers of tech blogs. “That’s where I would be most uncomfortable. They don’t know the difference between ‘they’re’ and ‘there.’ ”

Without missing a beat, Ms. Hammerling changes course, instantly agreeing with Mr. McNamee’s take. “I love you for that,” she intones. “I’ll leave the tech blogs out. Let them come to me.”

Instead, she decides that she will “whisper in the ears” of Silicon Valley’s Who’s Who — the entrepreneurs behind tech’s hottest start-ups, including Jay Adelson, the chief executive of Digg; Biz Stone, co-founder of Twitter; and Jason Calacanis, the founder of Mahalo.

The result? Not much. Wordnik is flatlining at an abysmal amount of traffic. Comscore and Quantcast don’t even register the site as a blip.

Compare Wordnik to Topsy, another recently launch service. Topsy launched on TechCrunch exclusively. The domain now has 577,000 results on Google, compared to 56,000 for Wordnik. And the traffic difference is stunning: 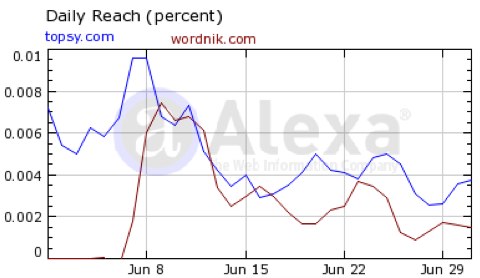 The article goes on for pages describing Hammerling’s incredible networking skills and propensity to namedrop at every opportunity.

Ms. Hammerling’s connections have been crucial for Brew in finding and serving clients, says Ms. Cook, her business partner: “Without question, that allows us to play at a different level, because we’re not just doing P.R. and media relations; we’re connecting people at the highest level, helping deals get done.”

I know Brooke well. I guess you could say I’m one of her many thousands of “very close friends.” And I don’t dispute that she is well connected, or that those connections help her get clients.

I believe Brooke’s client have been better served if she stood up to McNamee and told him that Wordnik would have had a better launch if they hadn’t ignored the blogs that are interested in covering new startups. Instead she became a “yes woman” and told McNamee exactly what he wanted to hear.

Hammerling and her peers in the industry should help guide their clients through the minefield of journalists and bloggers, rather than simply avoid it entirely out of fear or ignorance. She isn’t in the room to drop names or “help get deals done.” She’s there to make sure the client’s news gets spread appropriately. In that they failed miserably, and the client suffered.

As cool as Kevin Rose is (and he did apparently Twitter that Wordnik was “truly amazing”), this is not a launch strategy.