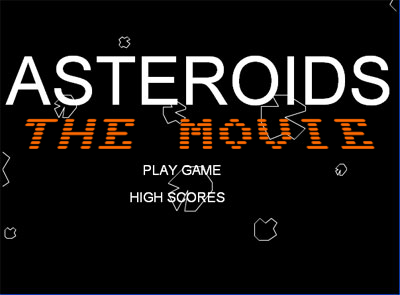 According to The Hollywood Reporter, movie studio Universal has won a bidding war to pick up the film rights to the classic Atari video game “Asteroids”. Initially released as an arcade game back in 1979, Asteroids featured a triangular space ship that needed to be navigated through an asteroid field.

The object was to shoot and destroy masses of rock and the occasional flying saucer while avoiding smashing into both, so we suspect it will not turn out to be romantic comedy.

Matthew Lopez will write the script for the feature adaptation, which will be produced by Lorenzo di Bonaventura, the producer of both Transformers movies as well as the 2005 adaptation of the Doom game.

Also wondering how you could possibly build a script around the simple game? Universal is just going to try and see if it sticks:

“As opposed to today’s games, there is no story line or fancy world-building mythology, so the studio would be creating a plot from scratch.”

(Hat tip to The Register, which offers some advice for a story line and potential cast)

Asteroids made by Neave Games