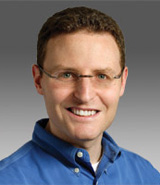 At the time of Yu’s departure there was speculation that he had been unable to secure investments at the company’s lofty $15 billion valuation established by the Microsoft deal, and that the company was considering an early IPO. Since then, things have changed: Facebook just raised a $200 million investment from Russian firm DST at a $10 billion valuation, which means it has plenty of money to keep its server farms churning and keeping pace with the site’s staggering growth.

Ebersman had been CFO at Genentech up until the company’s acquisition by Roche.

Ebersman will report to Chief Executive Officer (CEO) and Founder Mark Zuckerberg. He will oversee Facebook’s finance, accounting, investor relations, and real estate functions. He also becomes a part of the company’s executive management team, which directs all aspects of company strategy, planning and operations. Ebersman will formally start in September 2009.

“We received a lot of interest in the CFO position and had the opportunity to meet with many impressive candidates,” said Mark Zuckerberg. “We quickly recognized that David was the right person for Facebook. He was Genentech’s CFO while revenue tripled, and his success in scaling the finance organization of a fast growing company will be important to Facebook.”

“After meeting with Mark and the rest of the team, I was thoroughly impressed with everyone’s drive and sense of purpose to help people connect and share,“ noted Ebersman. “Mark is constantly pushing the company forward and he’s assembled a world-class team that is achieving remarkable results both for its users and as a business. I’m excited to join this effort and this new industry.”

Ebersman worked at Genentech for nearly 15 years. He served as the firm’s executive vice president and CFO from 2006 through April 2009, when Roche Group acquired the company. Prior to joining the company’s finance organization, he was senior vice president of Product Operations. He joined Genentech as a business development analyst. Previously, he was a research analyst at Oppenheimer & Company Inc.