If you’ve tuned your TV to CNN at all over the past week, you’ve probably witnessed a sweeping love affair. I’m not even kidding when I say that I think CNN’s anchors have used the word “Twitter” more than they have uttered “CNN” during that time. And while some people hate that, I think it’s great, because the service is providing a very, very valuable service for spreading information about what is going on in Iran right now. But none of that matters if CNN cannot use its Twitter account correctly to disseminate that news.

Look at the CNN Breaking News Twitter account right now. 8 of its last 10 tweets contain a broken link. This is a Twitter account with nearly 2 million followers, that CNN is promoting like no other on its shows, and it’s 404-ing millions of people.

Why this matters is of course because so many people are using this account as their main means of getting news about Iran. When CNN tweets out things like “Daughter of former president Rafsanjani arrested #iranelection,” and then has a link that doesn’t work, a lot of people are obviously very upset.

If you’re going to insist on basing most of your coverage around Twitter CNN, please figure out how to use it. 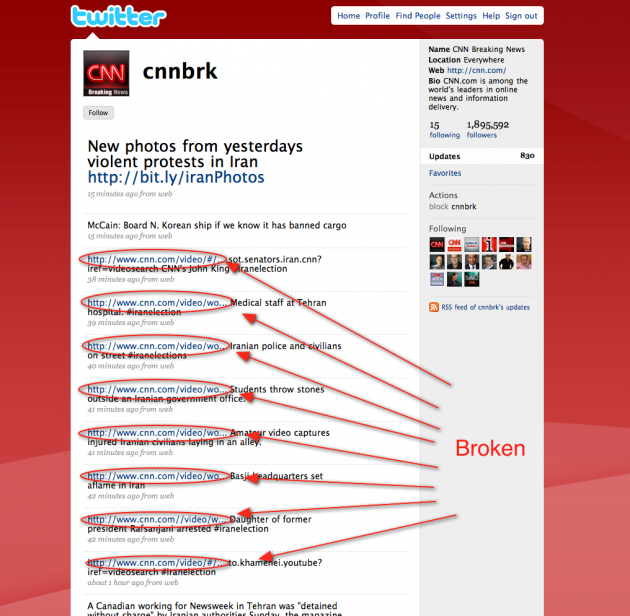 Update: It looks like CNN has figured it out after an hour with broken links. Whoever runs their account started using TweetDeck instead of the web, and so now all of the links are using the Bit.ly URL shortening service. But that’s interesting too. Why does CNN, which has a natural URL that is already very short, not just make its own short URLs? That way it could also guarantee they will work if a service like Bit.ly goes down.