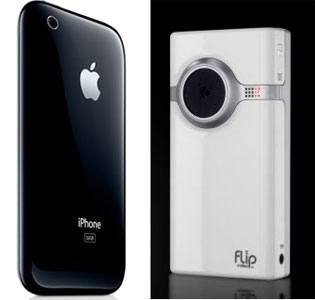 As successful as Pure Digital has been with their Flip line of video cameras – selling $150 million worth of them last year – they face a new type of threat that they can’t defeat. The video capable iPhone, and video mobile phones in general, will make them irrelevant in the next couple of years.

Flip cameras have really grown on me. A year ago I didn’t see any point in it, since most point and shoot cameras did everything the Flip could do at the same or better price point, and they took good pictures, too. The Flip was very simple to use, but the software wasn’t so great and it didn’t play well with Macs. I didn’t see the point in carrying the extra device.

But at the end of last year Flip released the Mino HD and everything changed. The device was a lot smaller than most point and shoot cameras, and took way better video (1280 x 720 high definition video v. 640 x 480 on most point and shoot cameras). They also fixed the software to work well with Macs. And the joy of taking a device out of the box – no cords or wires at all – was real. Their $590 million exit to Cisco was well deserved. I now love my Flip camera, and not just because the company sent me a check for $1.3 million.

Along the way Pure Digital fought ridicule from the big video camera companies, who said nobody would want the device. Then, once Pure Digital proved the market, all those competitors jumped in with their own offerings. There are now many devices with similar tech specs as the Flip, but Pure Digital has managed to stay ahead of them all by innovating faster.

That’s just not something they’re going to be able to do v. the iPhone and other similar devices to come.

The new iPhone takes very good video (640 x 480). That isn’t as good as the Flip (not yet anyway, word is that it actually can shoot HD video but is being slightly crippled), but it’s still able to shoot perfectly good videos on the go (example), which is exactly what the Flip is for. And the iPhone has something that the Flip will never realistically have, cellular and wifi connectivity that lets you upload your videos immediately. No need to sync back with your base computer to edit the video and upload it. You can do basic editing right on the iPhone, and publish it to YouTube immediately. As an added bonus, that video can be geo-stamped via the phone’s GPS capability.

That makes it significantly more useful as a video device than the Flip, and worth the reduction in quality. You already have to make some quality tradeoffs with the Flip anyway, so if you are going to have a second video device after your iPhone, it may as well be a slightly bigger video camera that you keep in your bag. I just don’t see people grabbing that Flip when they run out the door.

And one last killer feature of the iPhone – live streaming video from services like Ustream and Qik are already a reality – most TechCrunch authors have been using it for months on the old iPhone. At some point soon Apple will allow those apps to launch, and iPhone users will be able to stream video in real time from their phones to the Internet.

The Flip still costs less than the iPhone, and the transition will be gradual. But most everyone carries a phone anyway. And within a couple of years video will be as ubiquitous on those phones as photos are today. Flip won’t have a chance.

Flip As A Brand v. Flip As A Device

Last year I wrote about a possible way for Amazon to fork it’s Kindle business to really dominate the e-book market: build signature devices and actually pay ODMs to use the software in a unique reverse-licensing model:

Imagine if Amazon launched a licensing program that gave hardware manufacturers the ability to build Kindle clones, along with an incentive to sell them at near-zero margins. Amazon would give those manufacturers access to the core Kindle hardware specs (there’s no real magic there anyway) and the right to call it a Kindle device so long as they also put the core Kindle software on the device. That software links the device to Amazon’s store, meaning downloads revenue flows through Amazon.

Flip could do something similar – leverage its brand to convince handset manufacturers to Flip-certify their devices.

Garmin, facing stiff competition for its GPS devices from mobile phones, is doing exactly this: “the nuvifone is Garmin’s entry into the cellular phone market and considered key to the company’s future. Cell phone carriers have increasingly been chipping away at Garmin’s market, adding navigational features to their phones.”

There’s no reason why Cisco shouldn’t work with handset makers to make them “Flip certified” – high quality video hardware plus the awesome Flip software installed right on the phone.

Another way for Flip to go is to launch a series of higher quality video cameras to compete higher up the food chain.

Both strategies have big holes, and neither may work. But one thing is certain – In another year there will likely be multiple mobile devices that record video as well as the Flip, and have the benefit of GPS geo-stamping and mobile uploading. Flip will hit a huge brick wall. If the brand wants to live, it needs to adapt.