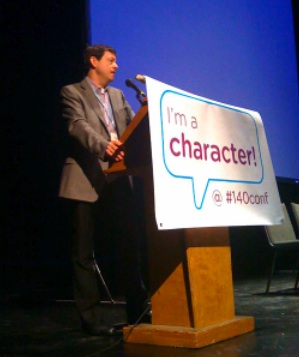 Venture capitalist Fred Wilson, who is an investor in Twitter, argues that the value of Twitter is “all about links.” Today at the 140 Characters Conference in New York City, Wilson gave a presentation ostensibly about how to make money from Twitter. The value of Twitter, he says, is in “the power of the passed link.”

He compared Twitter’s recent organic growth to the early growth of Google (minus any mention of Twitter’s recent slowdown) and shared some analysis of traffic to the Websites of his portfolio companies and his blog. Google is the dominant source of traffic, but over the past 12 months Twitter [and Facebook] traffic has been growing 30 to 40 percent per month. It is becoming a significant source of traffic to those Websites, to the point where it is now bringing about 20 percent as much traffic as Google.

Wilson predicts that at current growth rates, Twitter [and Facebook] “will surpass Google [as a source of traffic] for many websites in the next year.” And that just as nearly every site on the Web has become addicted to Google juice, they will increasingly try to find ways to get more links from Twitter. Because Twitter equals traffic. (We’ve noticed a similar trend at TechCrunch, where Twitter is now our second largest outside source of traffic after Google).

Moreover, he asserts that these Twitter links “convert better” than search links because they are often pre-filtered and come in the form of a recommendation from someone you are following. And while spam is a growing issue, it is somewhat mitigated by the ability to unfollow anyone who abuses your trust.

Given these dynamics, Twitter needs to “inject a paid model” into its service, says Wilson. He is clear that he is not speaking on behalf of Twitter:

I am not telegraphing anything here. It is the obvious thing to do. If they don’t do it, someone will figure out how to do it as a third party application.

Twitter co-founder Jack Dorsey was sitting right next to me when Wilson said this onstage. He didn’t seem surprised by anything Wilson was saying. But how exactly is the best way to inject paid or sponsored links into Twitter?

Again, looking at Google might be instructive. Google delivers traffic to Websites through a combination of organic and paid links. The paid links amount to billions of dollars in revenues for Google, but they wouldn’t work without the links in natural results. Twitter needs to come up with unobtrusive ways to inject sponsored Tweets with paid links into people’s Twitter streams. It is still not clear, however, how it can do this without turning off users.

Update: Fred Wilson points out in comments that his observations were “about facebook and twitter together, not twitter specifically.” Fair enough, Twitter isn’t the only stream out there. Although, if his referrer logs look anything like ours, passed links on Twitter bring in five times as much traffic as passed links on Facebook. Maybe it is the exact opposite for him. So wherever you see Twitter above, insert “and Facebook.” But he was at a Twitter conference, after all, and passing links is more of a core activity on Twitter than it is on Facebook, which is why I focused on his comments as they applied to the former.