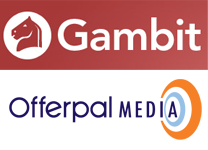 Offerpal Media, an advertising platform concentrated on helping developers monetize social networks by offering virtual currency in exchange for participating in ‘offers’ like online surveys, has filed suit against Kickflip, the company behind the Gambit payment engine.

As first reported in GigaOm, the suit alleges that Kickflip temporarily used Offerpal’s services for the purpose of stealing knowledge of how the service worked, which it then used to start a competitor. From the suit:

[Kickflip] misrepresented its intentions in forming a relationship with Offerpal, and then used the information and trade secrets learned in the course of the relationship to develop and improve Defendant’s own competing service.

Kickflip responds that the suit has “absolutely no merit”. The company originally started off as a game developer in 2007 (you can see a list of their old games here). The company says that during that time it has tried to use OfferPal and SuperRewards (an OfferPal competitor) to monetize their games but that both were unable to meet their needs, so they built their own service. The company’s ‘about’ page offers a similar background:

In 2007, we formed kickflip inc. to build online games, eventually reaching over 7 million users. We had the same problem you have…making money. So we built all the tools we needed to help users pay for our games. Our users loved it. We loved it. So we thought we’d allow a few friends to use it. Surprisingly, the developers and their users liked it too. Since then we’ve been focused on providing the easiest payment solution for online games and communities.

Kickflip has issued the following statement regarding the suit:

We were game makers long before we built Gambit. As game makers, we used the services of both OfferPal and SuperRewards. We noticed these services couldn’t keep up with our needs, so we decided to build our own, which turned into Gambit. Since then we have been building partnerships with game developers. We have a lot of respect for the business OfferPal has developed, and it is unfortunate that they feel it necessary to sue a former customer and game developer. We are confident that this lawsuit has absolutely no merit, and we plan to fully defend ourselves. If you have further questions, feel free to contact our lawyer: