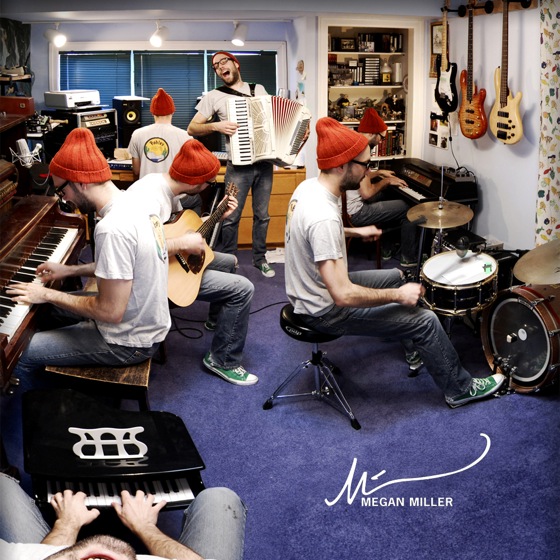 Jack Conte is an Internet musician who makes his living from selling MP3s online and generally running around like a madman making great music. I was introduced to him through Electro-Harmonix but I was amazed when I found the rest of his great music online. I met with him at a cafe in San Francisco where we drank huge bowls of coffee and talked music, technology, and hardware. He makes videosongs of himself recording his songs and sells his music online. Oddly enough, he also Tweets.

CG: So from a hardware perspective, and I know you use a lot of gear, it’s interesting how far things have come from your Dad’s old amp in the basement to a box that does everything for you. How have things changed in your experience so far and in terms of being a musician trying to get an authentic sound?

Jack: I think my ear is pretty good, but I don’t have formal training so my ear isn’t that good. I know when I like a sound. I’m pretty confident knowing when I like something… sometimes it’s the “wrong thing” but in terms of gear I always like the old stuff. My philosophy is that if it’s still around, it’s stuff people couldn’t bear to throw away.

The thing that’s cool about Electro-Harmonix is that they still make all those old pedals and old tubes. It’s tempting to get those electronic guitar boxes that does everything – I’ve had those before – but instead of opening doors they kind of close doors. The limitations imposed by that gear, using certain analog pedals, adds creative stimulation.

A certain number of musicians won’t be using the pedals, they’ll use the electronic stuff. But there’s a huge contingent of people who love the analog stuff. A lot of the modelers are really good, but I would rather use a pedal than a model of a pedal.

What would be the metaphor here for a non-musician? Something like a zoom lens vs. a prime lens?

If your options are limitless it can really hinder you. You don’t know which sound to choose.

The main thing for me is just how it feels. It feels better to have a button you can stomp on. You can mess with analog stuff, which you can’t really do with computerized stuff unless you’re really familiar with the software.

What about overproduced music? Top 40 stuff? Is it too much?

I love well-produced stuff. The craft and the art of production is something I really, really love. I guess it’s about what the goal is. I listen to a lot of top 40 stuff on the radio that’s incredibly crafted — I don’t necessarily love the songs but I love the production for the skill level.

On the other hand, someone like Bon Iver recorded an album in a cabin in Vermont and that’s really raw and human. I love that as well.

[youtube http://www.youtube.com/watch?v=VkIbo9VdGkg&hl=en&fs=1&]
You use mostly acoustic instruments that you run through pedals and other good stuff. Tell me about that.

I don’t love using synthesizers, but I do use synthesizers. I’m more inspired by acoustic instruments — as long as there’s something making the sound it’s something I really like. I like that I can unplug my Wurlitzer and still hear hammers striking the tines.

How does it feel being an Internet music celebrity? How has it helped your career? How would things have been different if you did this 10 years ago? 5 years ago?

That wasn’t possible 10 years ago. The infrastructure wasn’t in place. That is an exceptional transformation. I communicate with people through Twitter and MySpace. What I’m doing now probably wouldn’t be possible then. I’d be touring, trying to make a living. Now I can make music.

Will young musicians be following your footsteps? Will there be touring musicians?