Only a handful of blogs picked up on Google’s fresh Translator Toolkit, which the company launched yesterday by means of a blog post, but this new service really deserves a second look, if only because Wikimedia apparently sees the tool as something that could “change the way Wikipedia grows in other languages”.

You can read an extensive review of the product over at Google Blogoscoped, but here’s the gist:

Google Translator Kit enables anyone to upload documents for a variety of formats (HTML, Microsoft Word, Rich Text, OpenDocument Text and Plain Text), enter the URL for a file on the web or input a direct link to a Wikipedia article or Knol entry. After submission, the text that requires translation is automatically translated in the back-end and subsequently featured in a so-called ‘Workbench’, neatly placing the resulting text in the target language next to the original. 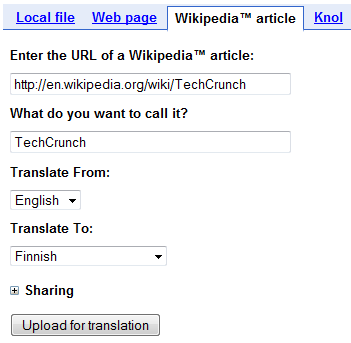 Google will search their translation memory for previous, human translations of the uploaded segment and show the translations in the Search Results tab. Color-coded segments will depict ‘exact’ matches and ‘partial’ matches, so you can edit the text based on the memory as well as previous, human translations. In addition, you can use the computer-generated translation in the Computer Translation tab to jump-start the translation of your current segment. When available, the toolkit will also search Google’s multilingual glossaries to help you translate specific terminology for your language, or you could use the Dictionary tab to do custom searches on Google’s multilingual dictionaries.

Besides the self-learning ability of the toolkit, the service also makes it incredibly easy for people to collaborate on translations, bringing a human, crowd-sourced touch to the automated process of Google’s Translate service.

(Thanks for the heads up, ArabCrunch)