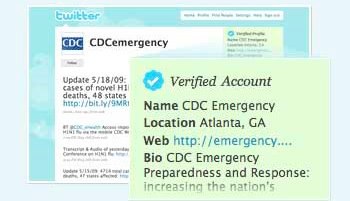 Twitter has faced harsh criticism from celebrities, including Kanye West, about impersonators creating unauthorized accounts on their behalf. Tony La Russa, the manager of the St. Louis Cardinals Major League Baseball franchise is suing Twitter claiming that someone is pretending to be him on the site.

Today, Twitter’s co-founder Biz Stone responded to the lawsuit, adamantly stating that Twitter will not settle with La Russa, calling the lawsuit an “unnecessary waste of judicial resources bordering on frivolous.” Twitter, as it has done with other similar situations, suspended the account in question.

But in response to the problem of impersonators of brands and famous people, Twitter is giving us a sneak peak of an experimental feature they call “verified accounts.” Twitter says it will start rolling out the beta of this feature this summer for a small set of public officials, public agencies, famous artists, athletes, and other celebs who run the risk of impersonation. Businesses will not be included in the initial beta testing of the verification seal. As you can see from the image, the account holder’s page will have a “verified account” official seal in its profile box.

Impersonation is a problem on the web in general. Aerosmith lead singer Steven Tyler recently tried to sue a group of anonymous bloggers for pretending to be him, which proved to be futile. Facebook, like Twitter, is another platform where impersonators can create unauthorized pages on behalf of celebs and public figures.

Of course some Twitter impersonations can result in amicable situations. During the Ashton Kutcher vs. CNN race to a million followers, it was revealed that CNN didn’t own the CNNbrk Twitter account. CNN ended up taking control of the CNNbrk account, under the agreement that the original account holder, James Cox, would act as a “social media consultant” to the network. While Twitter’s verification seal is still in an experimental phase, it seems like a step in the right direction.