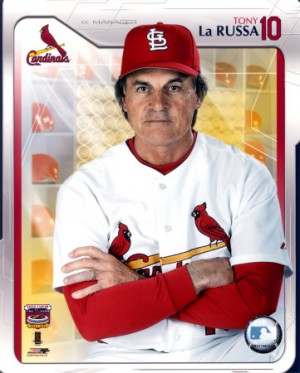 It’s an unlikely relationship, but Twitter and sports have gotten along quite nicely over the past few months. We all know about Shaq tweeting, and perhaps you even heard about the players tweeting during halftime of games. And if you watch ESPN or read ESPN the Magazine, you’ll find it littered with dozens of references to the service. At first, these references were made in jest, but now they’re mostly serious. But the Twitter/sports relationship runs the risk of souring after a lawsuit was publicized today.

Tony La Russa, the manager of the St. Louis Cardinals Major League Baseball franchise is suing Twitter claiming that someone is pretending to be him on the site. Of course, he could have just asked the service to take that fake account down — something which it does fairly regularly — but instead, the suit filed last month in the Superior Court of California in San Francisco seeks “unspecified damages.” Twitter has since taken down the fake account.

The suit is specifically for “trademark infringement, trademark dilution and misappropriation of name and likeness,” according to MLB.com. It also said the tweets were “derogatory and demeaning.” ESPN has some other details including that La Russa’s lawyers apparently included screenshots of these fake tweets which included, “Hey there! Tony La Russa is using Twitter.” No such tweet exists on Twitter Search, but perhaps Twitter has purged the results. Some of the tweets in question also apparently talk about a couple of Cardinals players who have passed away in recent years, which angered La Russa.

Impersonation continues to be an issue on the web in general. Aerosmith lead singer Steven Tyler recently tried to sue a group of anonymous bloggers for pretending to be him — of course, since they were anonymous, they couldn’t be tracked down and thus, didn’t show up for court. But Twitter is particularly hot right now and so a lot of people are taking advantage of it to make fake accounts for famous people. This is something that made Kanye West mad as hell a few weeks ago.