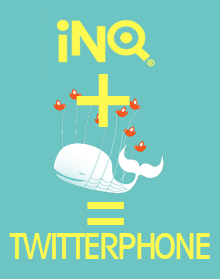 No need for q-tips, you heard it right: INQ Mobile will soon announce a phone with exclusive twitter-connectivity just in time for the holiday season. INQ, the makers of the Skype Phone, plan to really open up the twitter flood-gates, 140 characters at a time, using a mobile internet connection versus Twitter’s own SMS service. Seeing the Twitter boom, INQ plans to manufacture an inexpensive phone that replaces texting with tweeting.

“This can really help open up and drive Twitter use on mobile when usage becomes part of your data package like on the PC”, said Frank Meehan, chief executive of INQ in an interview with Reuters.

I’m not sure if Meehan owns a smart-phone or not, but mobile connectivity has gone hand-in-hand with Twitter since its inception. In fact, that is one key points of the success of twitter; tweeting from anywhere at any time has really made the service explode.

This product seems like quite the grandiose venture on paper, but I can’t figure out how this will succeed and, moreover, who this will be appealing to.

Why this product will most likely fail (whale):