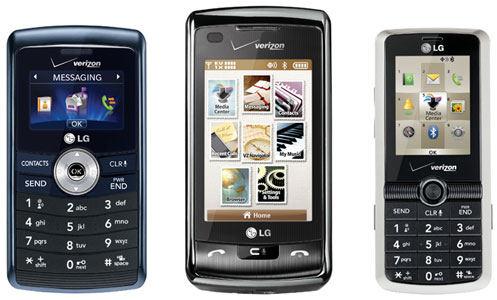 With handsets like the Storm 2 and the Blackberry Tour coming down Verizon’s pipeline, it’s sort of hard to get excited about anything else they’ve got. That’s not about to stop LG though – they’re poised to launch three new handsets on Big Red within the next few days. Let’s take a look: 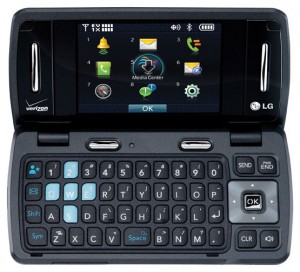 At first glance, the enV3 doesn’t look much different from the phone it was intended to replace. That’s actually because… it really isn’t. Sure, the enV3’s front face has been tweaked a little bit to allow for easier navigation, and both the screen size and camera resolution have received modest bumps (2.6 inches and 3 megapixels, respectively), but everything else seems to be strictly old hat. Those looking to stick to the basics with LG’s iconic flip-QWERTY style shouldn’t be disappointed though, and for $129 after a mail-in rebate, it’s a solid choice for texting addicts who don’t mind the merely modest update. Interested? If so, you can hit up your local Verizon store tomorrow. 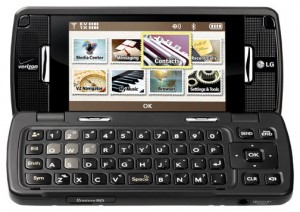 The enV Touch (a.k.a. the Voyager 2, before Plantronics had something to say about it) actually made out a little better than its little brother. The size of both screens has hit 3 inches diagonal, and they both sport a resolution of 800 x 480, giving even the Sidekick LX 2009’s legendary display a run for its money.  In a surprising gesture of goodwill toward more business-oriented users, the enV Touch also supports viewing Office documents (.doc, .xls, and .ppt) in addition to PDF support. Toss in support for up to 16 GB of expandable memory and a $179 price tag, and we may have a solid contender for the summer’s hottest seller.

The Glance is LG’s only truly original offering this time around, and it’s peculiar in that it’s one of their only non-touchscreen candy bar phones in recent memory. Slim and sleek, the Glance sports a unique woven metal mesh on its back plate, but that so far seems to be the only standout feature. With its 1.3 megapixel shooter and it’s slim stature, the Glance seems destined for a spot on the freebies list, but right now it’ll run all you LG devotees (seriously, who else would buy this thing?) $49.

Don’t worry if you’re a little strapped for cash though – both the enV Touch and the Glance aren’t due out until June 5, so you’ve all got plenty of time to dig through your couch cushions.