Multiply, a social network with a heavy focus on sharing media with friends and family, is getting a major upgrade at 10 AM tomorrow, introducing an overhauled (and much improved) interface, extensive photo editing functionality, a fully integrated photo finishing platform.

Multiply doesn’t get nearly as much attention as bigger players like Facebook and MySpace, but it has built up a solid base of users, some of whom are giving the company a steady source of income through its premium accounts. Where other social networks like Facebook have embraced a mentality of helping users widely share their thoughts and photos, Multiply has held onto the belief that sometimes users only want to share their personal media with a handful of their good friends and family.

With the latest release, Multiply is looking to embrace the “digital mom”. Recognizing that many of the site’s members are adults looking to share their media with loved ones, the site has adopted an interface that is best described as a media inbox. When you first log in, the site presents you with a stream of content similar to Facebook’s news feed (in fact, Multiply had feeds long before Facebook did). Your friends’ newest events, messages, and photo albums appear in the main column, with thumbnails next to each.

Navigation through the new interface largely revolves around a new sidebar at the left hand side of the screen, which strongly resembles something you might see in an Email client. The panel includes links to your most important friends and family, allowing you to make sure you catch all of their latest updates. Likewise, there are filters for the site’s groups, and you can create powerful custom filters – a feature that will appeal to power users. 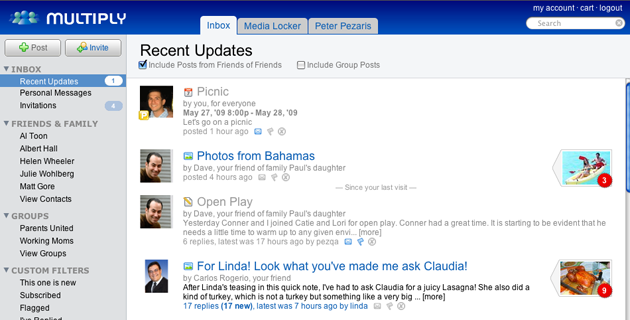 Aside from this feed of new items, the other main area to get an overhaul in Multiply 4.0 is the Media Locker, where you can upload and manage all of your photos, videos, and blog posts. This is where the new site really shines – Multiply 4.0’s photo manager strongly resembles native photo software like iPhoto, allowing you to drag and drop photos into whatever albums you’d like. You can use a slider to adjust how large the thumbnails appear during navigation, and the top bar includes handy links that let you quickly share albums via Email or through Multiply itself. It’s also much easier to export photos to the site’s printing storefront, which allows you to have your images printed into physical photo books, cups, and other products.

The Media Locker also includes a number of basic photo editing features, like red-eye reduction, color adjustment, and image cropping. Multiply isn’t the first social network to offer these features (MySpace launched similar tools earlier this year), but unlike the MySpace editor Multiply’s doesn’t need a Flash embed. To get your photos onto Multiply, the site offers a range of plugins for your computer’s photo software, as well as an AIR application that can monitor your folders for any new images as they are imported from your camera. 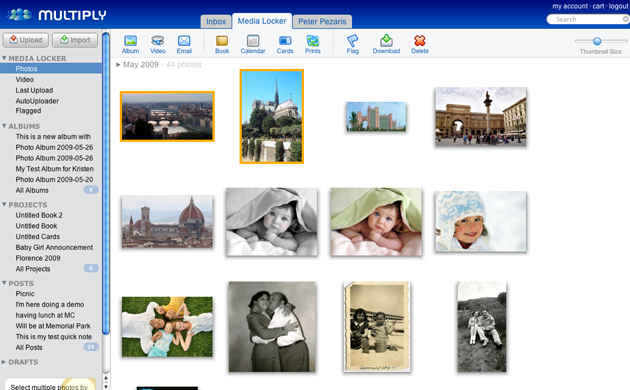 My one major gripe with the new site is the inconsistent appearance of the sidebar. While it appears and changes contextually when you’re in the Inbox or Media Locker sections, any time you visit a page or album on a friend’s profile, the sidebar vanishes. You can still get back to the other pages using the links at the top of the screen, but it’s strange for a UI element that seems persistent to disappear occasionally (imagine if Facebook’s menubar at the bottom of its pages only showed up some of the time).

Aside from that, Multiply’s new site seems solid, offering a social network that can really do your media justice. Facebook may be the web’s leading photo sharing service, and it’s great for sharing day to day photos with friends. But for those shots that really matter you can’t beat full resolution, which Facebook doesn’t offer. Multiply allows users to upload full resolution photos, with the option of paying $20/year for an unlimited amount of storage to to have them all backed up (not to mention its more extensive photo editing features). Multiply isn’t going to overtake Facebook or MySpace any time soon, but it’s doing a great job bridging the gap between photo sharing services like Flickr and the larger social networks.