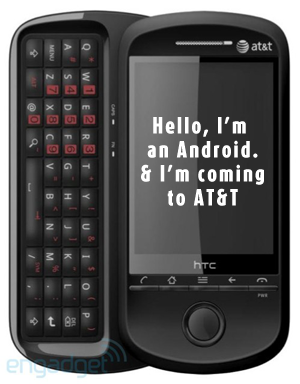 AT&T is playing with black magic, and some of its closest ties may get burned. AT&T will be launching the HTC “Lancaster”, powered by Google’s Android platform, making its way to retail stores in August of this year. Having AT&T’s first Android-powered device being released soon looks like this isn’t something that AT&T is setting on its back burners. This may be mildly damaging to Apple as they’re working on contracts and negotiations with AT&T for continued exclusive support for the iPhone. So is this AT&T’s way of showing Apple that it hasn’t become a one-trick pony, relying largely on the success and popularity of the iPhone?

This device’s aesthetics are a true mash up between the HTC-Magic and HTC-Pro, offering a very streamlined, sexy design. So, what does this little gem have running under its hood? Well, as reported by Engadget, it will come equipped with a 3-Megapixel camera, Bluetooth 2.0 support, AGPS, and will support EDGE and 850 / 1900MHz HSPA bands. I’m sad to say, however, its processor chip won’t hold its weight to the iPhone or any upcoming power-house phones and the resolution (marked at 240 X 320) is not impressive at all. This device, as drawn out on the specification-sheet, will only support video-playback, with no mention of actually recording videos that is now available for T-Mobile’s Android handsets with Google’s release of Cupcake. It’s nice to see healthy competition within a service providers selection of devices, but this phone is not shaping up to be a David to Apple’s Goliath. It’s a shame the first Android phone on AT&T is nothing more than a gutted, dulled down T-Mobile G1. 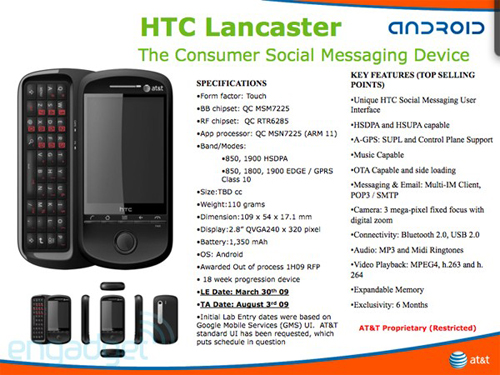