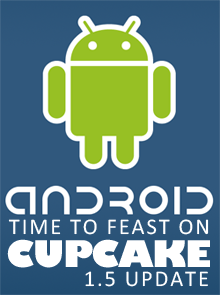 A man once told me that I could not have my Cupcake and eat it too. He was obviously dead wrong. Today’s big buzz on the Android front is that the official OTA install package for Android 1.5 (lovingly known around the internets as ‘Cupcake’ update) is now available for direct download and manual patching. For those of us who have waited patiently for the official patch but just can’t wait another day for it to come over-the-air, it is our day of rejoicing. At long last, we get to sink our teeth in to that green sugar-coated muffin, complete with video recording, on-screen keyboard, an expanding library of widgets, and stereo bluetooth support (to name a few additions).

Now, I know what you’re thinking, ‘Adam, how does one acquire this amazing software update?’ Well, you’re asking the right question. You can find this software on Google’s Android Code page HERE.

Please note that before you update manually (This will not ‘root’ your phone, don’t worry about that), that this method is not supported by T-Mobile. We’ve done this countless times as new updates have rolled in, and its worked flawlessly – but if your phone explodes, it’s not our fault.

So, follow these steps exactly and you’re going to have a nice, delicious cupcake too! (not a real cupcake, just a bad-ass update)

If you see the chip, everything went kosher and the radio is being configured and updated.

So, there you have it, just be patient while it boots up, the first time around it takes anywhere from 2-4 minutes. And I noticed that it was EXTREMELY slow after it became operation, however it completely subsided after 2 minutes or so. After the fact the performance has been nothing short of outstanding. The entire process took about 20 minutes from start to finish, and I’m a proud owner of a newly updated Cupcake. Now, I’m off to make senseless movies about my cat with the new video camera app.

[Via Phandroid and XDA-Developers]