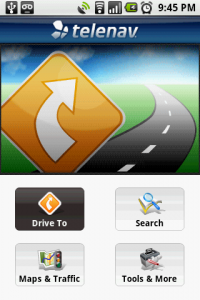 The GPS Navigation system has become a utility that is essential to travel, whether it be daily commute or cross country excursion. Once seen a luxury, this now-necessity has been a sweeping success all around the globe, allowing the world’s atlases right at your fingertip with near surgical precision in tracking and guidance. TeleNav, established veteran of the GPS marketplace, has really taken the time to make a fully functioning turn-by-turn system for the Android platform. Availability is currently limited to the G1, though we assume they’ll branch out to other devices as Android grows.

To fully appreciate this software, I felt I had to find myself outside of my familiar surroundings and truly get lost. So, off to the foothills of Northern California’s Sierra mountains I went. My almost-aimless journey led me few miles west of Auburn, California, known most notably for it’s rich gold-rush history. The town was perfect to put TeleNav’s power to the test, with desolate roads and winding paths, it would be easy for anyone with no familiarity to find themselves turned around out there. Being of the XY gene pool, I have no skill or courage to ask directions, so I powered up TeleNav’s software to get the ball rolling on my trek home.

TeleNav’s G1 software is pretty set to go right ‘out of the box’. It acquired my location with near-perfect accuracy and prompted my destination address. I decided, instead of typing out the address, I would put TeleNav’s voice search to the test. It asked me for the city and state first, after 2 attempts it correctly acquired the destination city I sought
after. Following the city/state combination, it prompted me to search for the exact address of my destination. It correctly recognized the address the first time up to bat, so kudos for clear and almost-robotic speech on my part, I suppose.

After TeleNav knew where I was and where I intended to go, it’s navigation user interface loaded. Very sleek and quite fluid, the screen gave a print out out of the basics: The street I was currently on, the street my next turn would be on, the direction and distance of my next turn, the total mileage of the trek, and the roughly-assumed travel time.

Without any issue, TeleNav guided me with a soft female voice around every turn and change of direction (Also offers español support for those who prefer Spanish). Having it search for traffic issues every few miles was also pretty neat, but seeing how it was 11PM, I didn’t expect much as far as backups or traffic jams. Before I arrived to my destination I made a quick detour to a local burger shack for a milkshake (all that driving builds a monster appetite). Back on to the road, TeleNav re-calibrated the millage, destination time and directions without me having to touch one button. After the 30 mile drive, I arrived at my destination with a very warm greeting from the robo-lady and her smooth demeanor. Not too shabby, I was pretty well impressed with the entire journey. It was the first time I had intentionally gotten lost, only to instill trust in to a mechanical device I had never used before. Having no issues on my return trip was a big plus.

The TeleNav software for the G1 surprised me, I wasn’t expecting this kind of quality for a GPS system on a mobile phone. I own a Garmin Nuvi, and it’s always pulled its weight as a standalone GPS device. Having this option of going mobile, however, is really sweet. But, as nothing in life is perfect, there are a few flaws. TeleNav doesn’t offer any hardware holster, which has become a standard feature with many standalone GPS devices. I was left just tossing my phone in a cup-holder, hoping it wasn’t in the mood to jump out. On top of that, if you don’t have a car charger, I wouldn’t dream of suggesting this product to you for any use beyond the shortest of trips. The G1 is synonymous with god-awful battery life and the GPS/3G just butchered my battery. The 20 minute trip knocked 30% perfect off of the freshly charged battery, which is impractical any way you look at it. This isn’t something I can get passed, but it isn’t really a flaw of TeleNav’s anyway (Ahem, HTC). Another issue that really irked me was the traffic report details feature… I LOVE this, but was sorely disappointed when I had to flip out the keyboard and press 0 to obtain any information. As it may be normal and justified on any other phone, I feel that could have been much less arbitrary, specifically to the design of the G1.

Overall, I was impressed with its functionality, TeleNav’s G1 GPS navigator has some big shoes to fill with the likes of the standalone systems out there, but they’ve done a great job growing in to them. The GPS voice was soothing, the speed and functionality was pretty mind-boggling (on 3G, at least. If you’re on EDGE, it’s a bit of a drag, but still completely usable), and the accuracy was damn impressive. Now if you’re looking to grab this software, it isn’t available in the Android Marketplace quite yet (The spokeswoman at TeleNav confirmed that it’s on the way) but is available directly through TeleNav’s site. The pricing is pretty heavy and is only available through subscription plans. The plans weigh in at $9.99 monthly, $99.00 annually, and $249.00 for a four-year block (The monthly plan offers a 1-month free trial before purchase). This may seem a bit high, but in the standards of GPS hardware, it isn’t the most expensive setup out there. I, as many would, wish the pricing was a bit lower… then again, I also wouldn’t mind finding bargain-bin Filet mignon, aged scotch, or DeLoreans (with in-tact and functional Flux Capacitor, of course.)

I wouldn’t recommend this application for public-transit commuters, but this is a great tool for business commuters and adventure seekers alike. The price is pretty well justified with the features, being an application for a mobile phone, it’s a keeper for me for sure. Now, in the opinions of many, this could be just a bit too much buck for the bang.

The search function for businesses and places 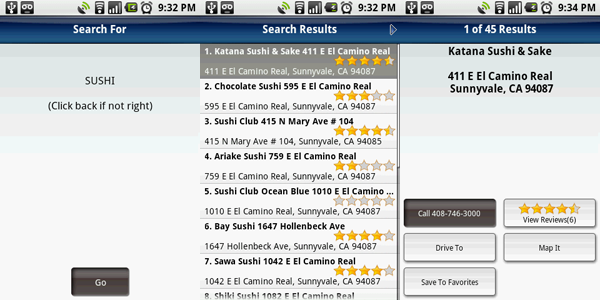 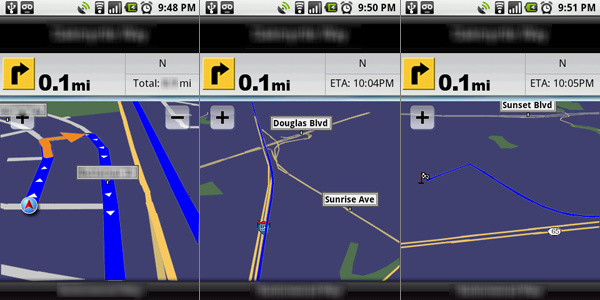 The traffic and incident report features 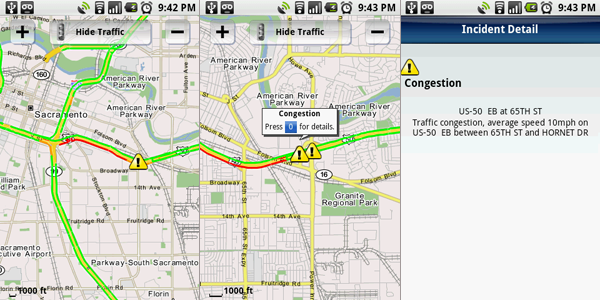 The weather feature, GPS location by default but can be changed to any city or area 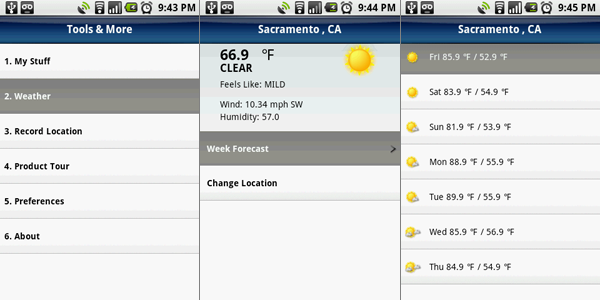