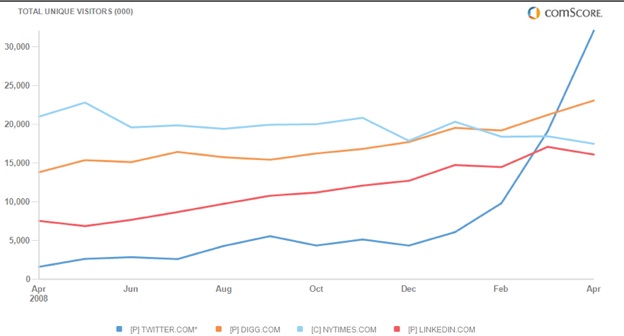 How quickly they grow. Remember when Twitter was just a little pipsqueek, with less than 10 million monthly unique visitors to its site worldwide? That was back in February, 2009. Fast-forward to April, and Twitter’s U.S. visitors alone reached 17 million. Now comScore has released its worldwide numbers and it estimates Twitter’s global unique visitors in April, 2009 was a whopping 32 million, up from 19 million in March, 2009.

To put that in growth into perspective, Twitter has just passed Digg (23 million), LinkedIn (16 million), and the NYTimes.com (17.5 million) in monthly unique visitors, as counted by comScore. And comScore only measures the number of people who visit Twitter’s Website, not the millions more who send and read tweets via their phones, desktop apps, or other Websites. Twitter.com is also now bigger than Bebo and Friendster, for what it is worth. Who will it pass next?

Its getting so big that its growth rate is beginning to temper. In April, Twitter added 13 million visitors, which is more than the 9 million it added in March. Its month-over-month growth rate, however, slowed to 68 percent from 95 percent the month before. Still, if it can keep adding 10 million global visitors a month, it will easily pass 50 million this summer and 100 million by the end of the year. No wonder everyone from Facebook to Google is looking over their shoulders.