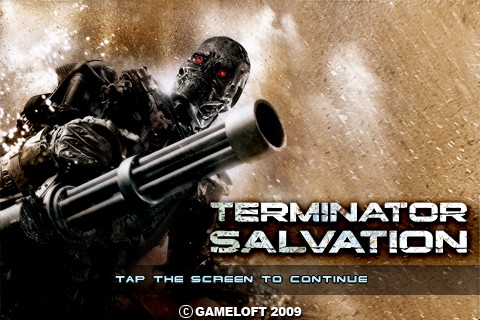 There are few iPhone games that I would label as a ‘premium’ title or as a ‘must have’ and one would expect a $10 title to garner such a nod, but Gameloft’s Terminator Salvation unfortunately falls short of receiving such accolades. That’s not to say the game is horrible. Far from it, actually, but I just expected more than two hours of gameplay. At the very least, I hoped to walk away with the desire to replay the game. It seems as though a lot of folks have felt that way: Gameloft has since slashed the price of the game to $6, which is a bit more tolerable for the eight-level shooter.

If you’ve played Brothers In Arms for the iPhone, the control scheme is exactly the same in TS. In all, there are four control schemes, but the default scheme is definitely the easiest to use. One scheme allows you to control the character (John Connor or Marcus Wright) using the accelerometer, but I have no idea why anyone would want to do that. Ever. Seriously.

The default setup has an on-screen joystick to your left that controls horizontal and lateral movement while swiping across the screen with other phalanges points you in whatever direction you want to go. Sauron’s eye must be tapped should you wish to fire upon your enemies.

Aiming for your enemies on the iPhone screen isn’t too difficult, as the game features auto-targeting. When you point the crosshairs of your machine gun in the general vicinity of an enemy, you’ll automatically lock on.

There is plenty of variation between enemy types, but the AI is lacking. That said, we’ve yet to see any game on the iPhone with impressive AI, so we’re not too surprised. They do mix things up a bit; each enemy you encounter has their respective strengths and weaknesses, so you’ll have to adjust strategy accordingly.

Mini-games and bonuses are virtually non-existent in TS. Other than some really lackluster BioShock-like vending machine hacking games and the ability to replay the game as a T-600, what you see up front is what you get.

There’s nothing compelling enough that makes me want to come back and play the game a second time around. The graphics and 3D rendering are fairly good, but we noticed a good amount of framerate lag throughout the 2 hour game.

Terminator fans might dig it, but I’d have a hard time recommending it to anyone else. Big Head Games and Dark Horse Comics have a top-down Terminator shooter hitting the App Store in the next day or so, so it’ll be interesting to see which fares better.