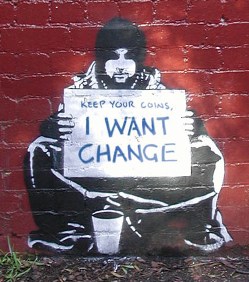 If you’ve been following the headlines on Techmeme over the weekend, you’ve likely seen more talk about the whole blogger vs. online journalism debate, the short-sightedness of big media and the inevitable demise of its historical business model. Every time that debate heats up, someone somewhere will at some point bring up the unlikely savior of the publishing industry once more: glorious micropayments.

This time, it’s The Guardian‘s Frank Fisher taking a stand, and he says not only will micropayments guarantee the newspapers a future, it can also downright “save journalism,” and oh, Google should be the one providing the infrastructure for it, too.

Time to debunk “Saving journalism, a farthing at a time”.

Fisher correctly points out the dismal state of the economy has driven advertising revenues down, and this puts newspapers in dire need of finding out how it should subsidize its operations in different ways, with the realization that the printing part of the equation is inevitably going to fade away and that there’s too little money to be made from online advertising to make up for the costs of transferring its entire publishing business (as it operates today) to the Web.

The rest of his opinion piece comes down to this: wishful thinking and misunderstanding.

“Publishers are in a nightmarish situation; they know the print side of their business is struggling, they know punters want their news online, but they can’t see how to make it pay. In desperation others may follow Murdoch’s retreat behind the paywall. Not good news for news addicts. It isn’t so much the money, it’s the usernames, passwords, subscriptions … Actually, it is the money. But publishers need a profit. Information might want to be free – but food and housing isn’t. So is there another way? Some model that brings in more than advertising, but doesn’t exclude casual visitors, either by cost or inconvenience? Well yes – an idea that won’t go away: micropayments.”

Publishers are in a nightmarish situation, and in large part they have themselves to blame for that. Fine with me if they want to escape from that situation by retreating behind paywalls – in fact, I encourage them to do so and die there soon so we can kiss that idea goodbye once and for all. How are paywalls bad news for news addicts? Those addicts have been spoiled to death the past few years, to the point where information overload has taken over and made the consumption of news overly tedious. I know because I’ve been one of them ever since I’ve been able to read, and this was long before I discovered the Internet. Introduce paywalls, ease the choice for news addicts, see what happens.

Information is now a commodity, so deal with it. And yes, it should be free to end users. But how will that pay for the food and housing of the people working in the publishing industry, you ask? I say it’s not our problem, and tough luck. In no way does the realization that the model doesn’t work anymore mean that the masses, lawyers, the government or any other institution should be bailing out newspapers for screwing up their chance to figure out this Internet thing in time and adapting to it. Publishers need a profit, like any other business, but that doesn’t mean they all deserve to turn one, and certainly not at the expense of better, more innovative publishing businesses that are waiting around the corner.

Go read the column in The Guardian (for free) to find out how micropayments for news would work in detail. Basically, it would involve Google doing the bailing out part I was talking about in the previous paragraph.

“The transfer potential of [Google AdSense] technology to a micropayments scenario is clear: individuals would sign up with Google, deposit funds. They’d have a unique ID attached to them at that point – an encrypted cookie stored on whichever PC they happen to log in with. When they visit a site with GoogleDosh embedded they’re allowed in, a fraction of a penny is switched to the content provider’s account for every item they read – if visitors aren’t GoogleDosh members, they’re re-routed, perhaps, to a précis, or a sign-up form, or even to a limited trial. The key difference from other micropayment schemes is scale – and that’s what beats individual site subscriptions too – sign up with one scheme, and you get access to thousands of sites. That’s my theory, at least. It’s technically simple – an easy step if publishers accept a single standard, and the success of Google Ads suggests they will. Publishers win, consumers win long-term by supporting content providers, and in the short term, if good sense among sellers prevails, they get a bargain: spending pennies a day for all the content they need.”

Publishers win, yes, to a certain extent. Google? maybe. Journalists? Up for debate. Consumers? Not likely. There are some content providers out there who have figured out how to build a business without the need for people to pay to support them, and their number will only grow in size in the foreseeable future. If anything, Google should (continue to) support them, and not the relics of another age.

For more perspective on micropayments, you should read “What Would Micropayments Do for Journalism? A Freakonomics Quorum”, in case you haven’t already. I’m lifting this part from the piece, a quote by Marshall W. Van Alstyne (associate professor in the Information Systems department at Boston University and a research scholar at M.I.T) because I think there’s no better way to conclude this post:

Putting micropayments on news is like putting tollbooths on an open ocean. Internet users, awash in a sea of information, will avoid new barriers by navigating around them. And frankly, the interests of a free society are rarely served by building barriers between the people and their news.