We’re all glad Q1 is behind us.

Silicon Valley and the start-up ecosystem certainly was not immune to the general economic malaise. The TechCrunch sweet spot, early-stage start-ups, was particularly hurt.

Early-stage start-ups are working hard to do more with less. The average number of staff at new start-ups founded 1Q 2009 was 6, down from 8 a year ago. How do we know? It turns out that there’s a wealth of interesting facts that we can glean from CrunchBase, our structured-wiki startup directory and primary data source for TechCrunch Research. What else did we learn from CrunchBase?

Here’s the thing, transaction volume was weighted heavily to Series B and later stages of investment, suggesting that VCs were focused on providing additional resources for their top portfolio companies as opposed to new deal flow. By example, only four of the startups founded last quarter also reported the closing of outside funding.

Perhaps most telling of all, no acquisitions were announced by Google, Microsoft, Yahoo!, AOL, or Amazon. We can’t remember a fiscal quarter where none of these companies announced even a small transaction. In total, $1.6 billion in M&A was reported for the quarter, down from $11.9 billion in Q1 2008. 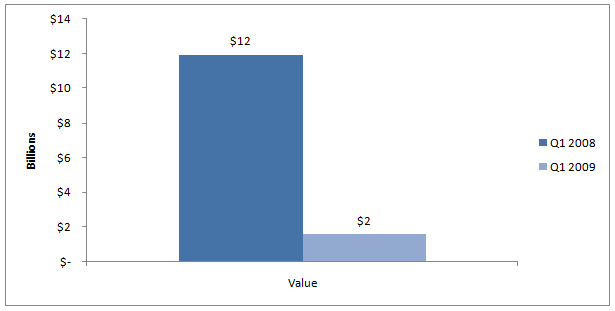 There were a total of 82 exits announced for the quarter, and the number of exits was actually higher than the 73 reported Q1 a year ago. In 2009, dealflow was tactical and modest in size. The two big deals of the quarter were Autonomy’s acquisition of Interwoven for $775 million and Cisco’s acquisition of Pure Digital Technologies (aka the Flip) for $590 million.

Despite a number of executive departures and hirings, we’re still waiting to hear new news from big internet media. After budget cuts are complete, what will be the sources of future growth? There is a vast sea of start-ups available at newly rationalized prices.

The full 28-page first-quarter report (including 32 interactive exhibits and charts in excel) is available for $149 as a download <a href="here. This quarter, we added all our raw data, charts and tables into excel so readers can easily cut-and-paste charts into their own reports and slice-and-dice the data for their own use. It’s a big improvement to our 2008 Year In Review. Of course, you’re also welcome to grab data free of charge through our CrunchBase open API.

See the report table of contents and table of exhibits here.