A year and a half after launching at our first TechCrunch40 conference, document-sharing service Docstoc is taking off its “beta” label with a homepage redesign, open APIs, and a new revenue-sharing model called DocCash. The service is growing at a healthy clip, with 3 million documents uploaded and 1.6 million unique visitors a month in the U.S., according to comScore. (The company’s internal Google Analytics shows 4.8 million unique visitors worldwide).

DocStoc is still much smaller than its rival Scribd, but hopes to catch up with some of its changes (as does Issuu, another document-sharing service that keeps adding features). In order to encourage more activity and higher-quality document uploads, DocStoc is introducing DocCash. The company will be splitting AdSense revenues 50/50 with anyone who uploads documents and wants to opt into the service. Right now the ads only appear on Docstoc pages, but will eventually include Flash ads in DocStoc’s embedded Flash player as well. (See video tutorial below).

DocStoc is also unveiling a new homepage with a much more blog-like feel. Featured documents a will be selected by an editorial team, more images will be highlighted, and different document categories are highlighted on the left (including business, technology, legal, and current events). Former TechCrunch writer and Website designer Mark Hendrickson worked on the new homepage. It looks much cleaner now, with topical documents and those related to breaking news now being highlighted (I’ve embedded Barack Obama’s tax return below—his income was $2.7 million last year!).

Finally, it is opening up its APIs so that other sites can integrate DocStoc functionality into their own sites. These APIs allow other sites to include previews and document embeds, document search, use DocStoc’s document viewer, and upload documents directly to DocStoc.

If DocStoc is ever going to catch up to Scribd, it will have to keep adding features and make sure the best docs are uploaded to it service. The APIs and DocCash might help, as well as little things like upload speeds (DocStoc seems faster to me). But with rising popularity also comes rising headaches. Already authors are beginning to complain about book piracy. Uploading copyrighted works is against the terms of service of both DocStoc and Scribd, but policing such usage becomes harder and harder with the number of documents getting into the millions. 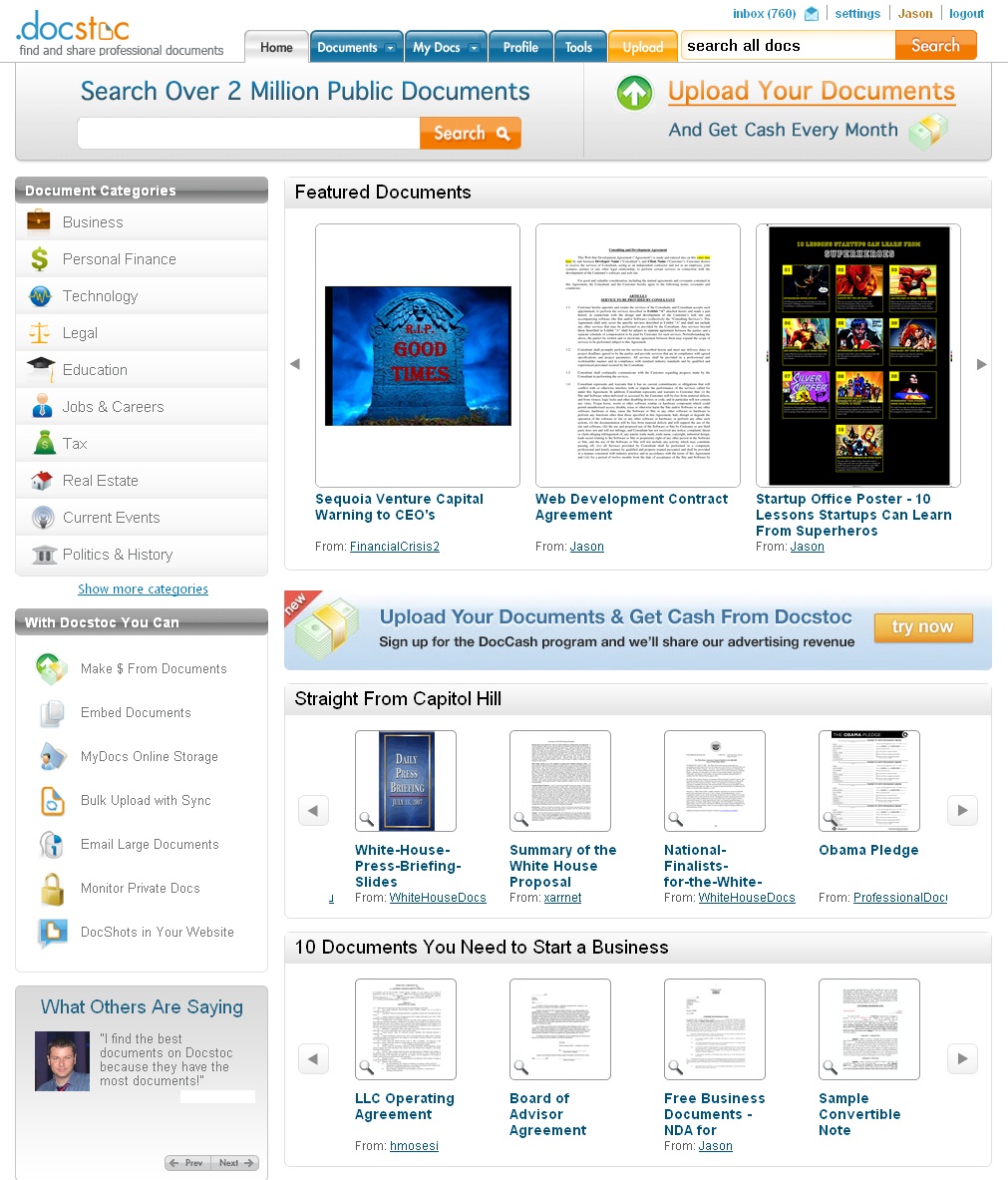