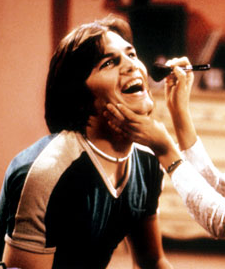 Ashton Kutcher got his start on the small screen. His roles in That 70s Show and development of the MTV show Punk’d (which is being kind of reborn with Ustream) allowed him to become a movie star. But these days he seems more interested in using the web to further his career. His recent race with CNN to be the first user with a million Twitter followers was just one facet of what he’s doing online. He also has his own web-based show Blah Girls. But now he’s sending that the opposite way: Back to television.

Katalyst Media, the production company Kutcher runs with Jason Goldberg, has signed a deal with CBS Television Distribution (CTD) to distribute Blah Girls on television. Specifically, the show will run as one-minute interstitials between segments on the entertainment magazine show, The Insider. While the show has run on the web since its launch during TechCrunch50 last June, a television distribution deal has always been a part of the broader goal for the content. And CBS has a larger development deal with Katalyst Media, so this is simply an extension of that.

Still, it’s a bit odd that Kutcher is taking the show to television after going on and on about how his race to a million followers showed that individuals could trump huge media conglomerates. And he beat CNN, but he still apparently needs CBS. Why? Because there’s money there of course, and it’s still tough to monetize an online video venture.

But Blah Girls will continue on the web as well, and I’m sure the CBS gig will get it some good exposure. Find a Mother’s Day episode of Blah Girls below.