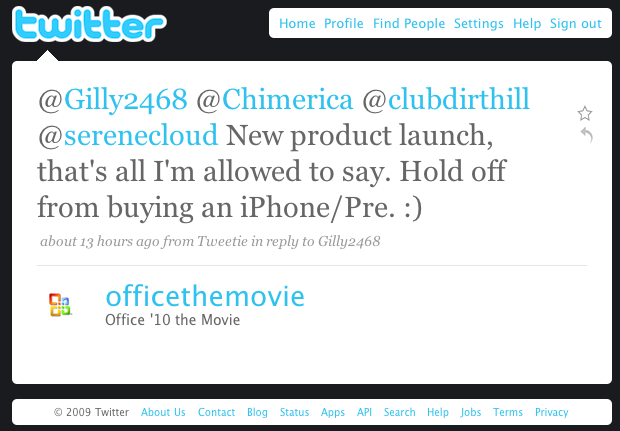 Late last night, someone going by “officethemovie” on Twitter indirectly announced a Zune phone, suggesting a release date of June 2009. By this morning, a ton of blogs had ran with it. It seemed legit enough at first glance – even Microsoft’s own Office 2010: The Movie site linked to it.

Still, something seemed a bit off to us. I mean, sure – HTC might use Twitter for product announcements, but Microsoft? It just didn’t seem right.

And it wasn’t. Turns out the Office 2010: The Movie page was linking to a dead Twitter account. The official Twitter account is Office2010Movie, whereas Microsoft’s site linked to officethemovie. Someone with quick fingers and a dastardly plan snatched up the account, rounded up a bunch of followers, and announced something that didn’t exist. The officethemovie Twitter stream now gives credit to Haklab for the heist, claiming that it was an effort to get Apple to pay attention to their anti-iPhone-Piracy movement.

Be wary of what you read on the Internet, folks – even if all signs point to legitimacy.