When Medialets was founded in June of last year, CEO Eric Litman and his team decided to take a risk. They bet big that Apple’s iPhone platform would explode. It did — and it’s taken Medialets along with it. Today, the mobile analytics and advertising company announces its series A round of funding.

It was barely a month between the founding of the company and the launch of the App Store on July 11 of last year. But Medialets was there from day one. And thanks to that early start, the company’s offerings can now be found installed on nearly half of the iPhones and iPod touches out there in circulation. And their clients include many of the top downloaded apps. But the company clearly hopes the iPhone is just the beginning.

With its new $4 million round led by Foundry Group, and participated in by DFJ Gotham and early Google investor Bobby Yazdani, the company is thinking expansion. It already has been on the Android platform as well since last September. But while that platform has thus far failed to ignite a new market the way the iPhone has, indications seem to point to 2009 being a good year for the platform with many more Android devices coming. The team has already secured over 1,000 developer partnerships between the iPhone and Android platforms.

More importantly, Medialets is also looking to support BlackBerry, Windows Mobile, Symbian and Palm Pre in 2009. That would obviously put them on basically every major mobile platform.

Medialets has a really nice looking offering it terms of its advertising platform (screenshot below), and Medialytics, its analytics offering, has proved me with some solid mobile data over the past few months (all anonymous of course). One nice thing about Medialytics, is that it can work whether a user is online or offline — something which is often the case with the WiFi-only iPod touch. 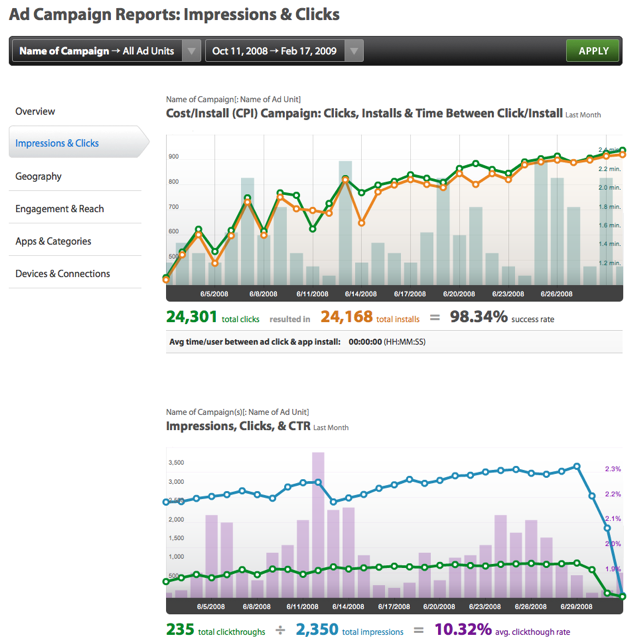