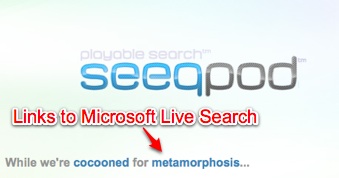 Earlier today, I wrote a post wondering whether music-search engine Seeqpod had finally sold itself to Microsoft because of a suggestive link on its homepage linking to Microsoft Search. Some other bloggers noticed also. Since then, I’ve been able to confirm that no acquisition has closed and that talks continue. Seeqpod is indeed speaking with Microsoft, but not about an outright acquisition. Rather, it is trying to negotiate a piecemeal sale of its technology assets and find new jobs for its core technology team.

And while Microsoft seems to be interested in the largest chunk of Seeqpod’s assets, the company is speaking with other large search companies in hopes of finding a home for the other pieces. These assets include its targeted crawling system for finding playable media on the Web, its search index of 14 million playable search results and 500 million associated text pages, its recommendation and discovery system, five related patents, and the teams associated with each of these technologies. The fact that Seeqpod is in Chapter 11 bankruptcy makes this sort of fire sale easier to pull off. As far as the pending lawsuit with the music industry which forced it to seek protection under bankruptcy in the first place, there is no plan to settle at this point in time and “become an ATM machine” for the dying music industry, says my source.

So why would Microsoft want to touch Seeqpod, even with a ten-foot pole? It’s underlying search technology can be applied to many other areas besides music search. Seeqpod actually got its start at Lawrence Livermore Lab and genomic search (matching genomic sequences to diseases, symptoms, and even foods), so there are health search applications. But more broadly Seeqpod’s technology is around “playable search.” It can bring back playable media results (audio and video, primarily) for practically any search term. That is the kind of technology and team that could help Microsoft’s general search engine.