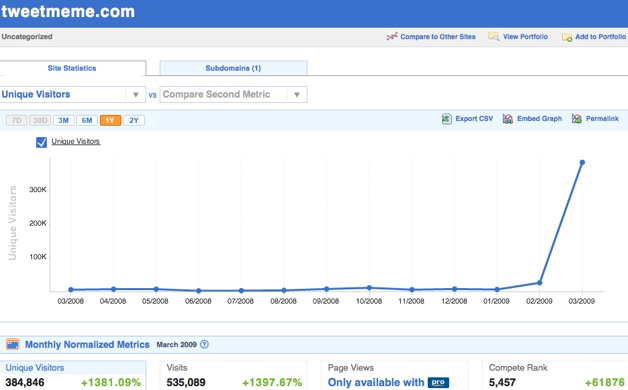 Tweetmeme is on a tear. According to Compete, the Twitter-centric link tracker went from nowhere in February, 2009 (with 26,000 unique visitors) to more than tenfold increase in March (to 385,000 uniques). Nick Halstead, The CEO of UK-based Fav.or.it, the company behind Tweetmeme, tells me he is tracking closer to 200,000 uniques a month based on yesterday’s visitors, but that he is adding 50 percent a week. Tweetmeme seems to be pulling way ahead of the other Twitter link sites such as Twitturly or Twit Links. Any way you slice it, Tweetmeme is doing something right.

The site shows the most popular links on Twitter ranked by a combination of the number times the link has been Tweeted (shown as a big number beside each headline), recentness, and momentum of Tweets. It also categorizes different news stories based on the title of the post or article, the underlying domain, and hash tags within the Tweets. You can sort by Comedy, Entertainment, Gaming, Lifestyle, Science, Sports, Technology, or World & Business. You can also sort by news, Images, or videos. It pulls together 200,000 links, images, and videos every day now. And you can follow what is makes it on Tweetmeme’s homepage via Twitter itself by following the @Tweetmeme account or sub-accounts for each channel such as @tm-technology or @tm_comedy.

Today, it added OAuth, which lets you sign in with your Twitter account and retweet headlines without leaving the page. It also launched a toolbar, which will be controversial because it opens up the underlying link within a Tweetmeme URL and frame much like the Diggbar does. Instead of showing how many times the story has been Dugg, the frame shows a count of how many times the story has been Tweeted along with a “Shuffle” button (equivalent to the Diggbar’s “Random” button) that will take you to another highly Tweeted story.

I am not a big fan of the toolbar in principle, but I can see why Halstead added it. It keeps people on Tweetmeme and drives more activity. At least, it can be easily closed. But with every site adding its own frames these days, pretty soon there won’t be any room left for the actual destination site you are trying to look at.

What I am a big fan of, though, is that after a recent relaunch, it just keeps adding features. A few weeks ago it added a “live” tab which shows the most Tweeted links stream onto the page much like FriendFeed now handles your personal activity stream. Thankfully, you can set it to stream only stories that have been Tweeted at least 5, 10, or 20 times. Even setting it to 5 links is unreadable because the stream moves down too fast, but at 10 or 20 its becomes more manageable and addictive in that you can watch the most popular links in the Twittersphere stream by in real time.

This live stream of relevant headlines is much more immediate even than what you find on Techmeme, which can take hours to change meaningfully. With so many sites gunning for Techmeme’s crown as the ultimate arbiter of what news is being talked about the most on the Web (I wrote about one such attempt earlier today), the real threat is going to come from somebody like Tweetmeme, which plays to different strengths. The question is whether Twitter will be a better place to mine for buzz than blogs, news sites, or the rest of the Web.

Right now, I’d say the answer is no. Not because Tweetmeme doesn’t surface the most Tweeted stories, but because everyone on Twitter seems to be obsessed with linking to stories about Twitter! For instance, right now 6 of the top ten headlines on Tweetmeme are about Twitter acquisition rumors. To be fair, that was also the top story on Techmeme for most of the day. But at least Techmeme has moved on (to Kindle rumors!). Will the stories on Tweetmeme ever become more relevant and timely than on Techmeme? If I were Gabe Rivera, I’d start worrying now. 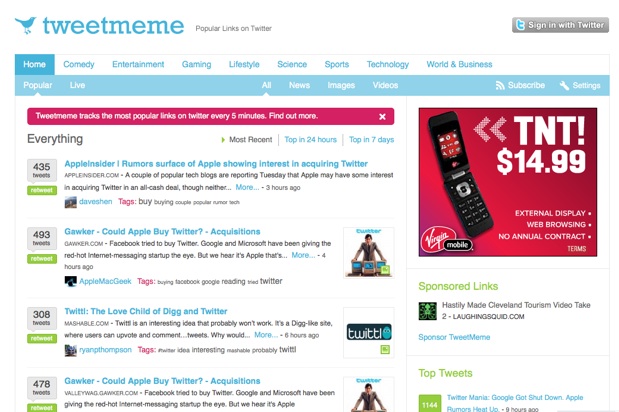