If you own an iPhone or iPod touch you’ve probably at least heard of QuickPWN, the jailbreaking tool. You’d think Apple doesn’t want you know know about it, because it allows you to open up your iPhone to use apps outside of the App Store ecosystem. But looks what we found: In Apple’s own webapp directory, Apple has a listing for QuickPWN.

And in fact, if you do a Google search for “QuickPwn Apple,” this directory listing is the number one result. Granted, this is just a webapp directory listing, so it’s not like Apple let a QuickPWN third-party app slip by the App Store approval process, but still, it’s kind of funny to see it there. And the developer who put it there (who, incidentally, is not associated with the actual QuickPWN Dev Team) is planning to try to make an actual App Store app soon, he tells us.

Good luck getting that in there — but you never know, stranger things have gotten through the approval nets. 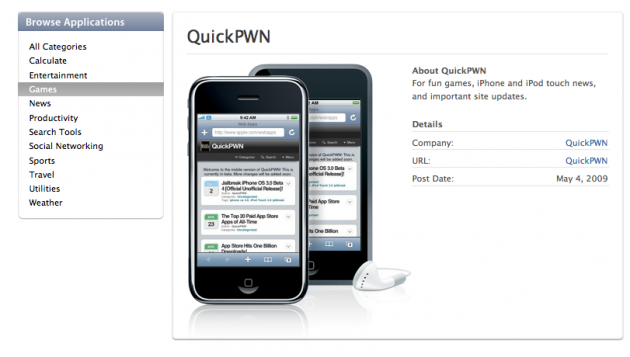