Seattle-based Gist has secured $6.75 million in Series A funding led by the Foundry Group with participation by its founding investor Vulcan Capital. The investment will be used for product development efforts and to expand operations.

Currently in closed beta, Gist integrates with Microsoft Outlook and Gmail to aggregate, organize and prioritize emails, links, attachments, and related information (news, blogs, etc.) in a user’s email inbox. Gist also integrates with LinkedIn, Facebook and Twitter bringing feeds and information together across social networks. Users can access Gist on the web, inside applications (i.e. Outlook), or on their mobile device. Gist has an iPhone app that is also available.

Launched in 2008, the company was founded by T.A. McCann, an entrepreneur and former senior employee in Microsoft’s Exchange Server Group. It was started and initially funded by Microsoft co-founder Paul Allen’s Vulcan Capital. After extensive prototyping and research, McCann and Vulcan launched the company in mid-2008 with its headquarters in Seattle, WA.

Here’s a screenshot of Gist’s interface: 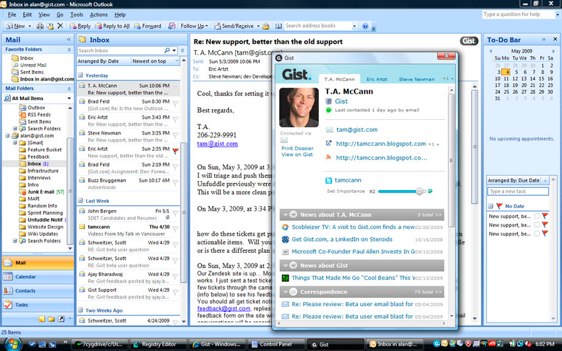