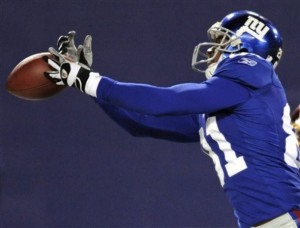 Hail Mary – noun: A long forward pass in football, esp. as a last-ditch attempt at the end of a game, where completion is considered unlikely.

New reports have several companies on the verge of releasing large screen electronic readers designed specifically for reading newspaper content. The first such product may be unveiled as soon as this week — a large screen version of Amazon’s Kindle, which we first reported on last year. This is setting up a lot like the newspaper industry’s Hail Mary. And it’s a pass they won’t catch.

The industry has been hit worse than anyone else by the ad spending slow down in our current recession. Almost all of the major newspaper companies are bleeding, and this week The New York Times Company may have to close the Boston Globe — a huge metropolitan newspaper. It’s sad. Some of the best journalistic work throughout this country’s history has been done through newspapers. But if these companies really are putting their faith in a large screen Kindle to save them, it may be time to start mourning them for real.

The idea that a large screen Kindle (or any similar device) could save newspapers is a joke — and one that perhaps shows these newspapers do not even know their own killer. It’s not the “paper” part of newspaper that’s the problem, it’s the “news.” As in, newspapers are way too slow at delivering it in the age of the Internet. People are unsubscribing from newspapers because what’s the point of reading something in print a day after you’ve read it online? Sure, there are certain takes by certain authors worth reading later, but even most of those are now online first. And of course there is something to be said for good journalism, but that is being done online as well — and can be viewed for free. For the most part, the newspaper industry as it stands today is the very definition of “a day late and a dollar short.”

Would the newspapers save a lot of money by literally stopping the presses, and distributing their content digitally to these readers? Of course, but they would save just as much money — if not more — by entirely switching to the online format. Some have already done that, but many don’t want to because it’s proven hard to make people pay for content on the web. But the idea that people are going to run out in droves to get these new giant Kindles just to have the privilege of paying for newspaper content is absurd.

Yes, some people are paying for the content on regular Kindles right now, but that’s only because that device has a gateway drug: Books. Books have proven to be popular in electronic format (beyond Kindle, just look at the iPhone eBook sales to prove it). But books are fundamentally different from newspapers. There isn’t a free online equivalent to books, like the newspapers have to contend with in blogs. People do not buy Kindles just to get the newspaper or magazine content, and they’re not about to start now. 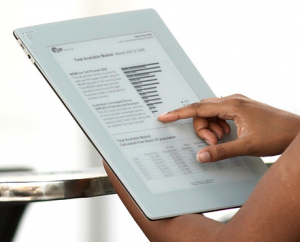 In fact, I’d argue that it’s the much less sexy textbook business that could be the real key to this big Kindle. Textbooks are an absolute rip-off in print form, with many costing over $100 a book. If Amazon was able to offer textbooks on this large Kindle at a discount the same way it offers a discount on regular books on the regular Kindle, that would be worth the price of admission for just about every college student in the country right there. And a Kindle textbook reader makes sense because it would make bookmarking, taking notes and syncing all of those things up to the cloud, a snap.

But the number one problem with the Kindle is its price. At $360 it’s way too expensive for the average consumer to go out and buy. So how much would a Kindle with a larger screen cost? You’d have to imagine it would be more, if not significantly more. So let’s assume that it’s $500. And if it’s $500, for a device meant to read newspapers and magazines (in grayscale no less), it might as well be $10,000. Again, the only reason the Kindle is selling pretty well at its ridiculous price is because of books. Newspaper and magazine content will not mobilize users in the same way.

Speaking of mobilizing, one reason people still do enjoy newspapers is because they are very mobile. But who on Earth is going to want to take a large screen Kindle on the go? Sure, if it is also a tablet computer that has many functions, it makes sense to carry around — but again, just a device for reading newspaper content? No. And such a device, like the Kindle itself, is just a holdover until all of these devices start to merge. And that’s going to happen sooner rather than later.

So I implore newspapers not to put too much stock in these big screen Kindles. I know the options are awfully thin as to what can save you, and the Kindle is a potentially sexy savior; but it is not the answer. I’m really worried when I read articles like the one in the NYT that quotes high ranking print media industry folks as getting all excited about the possibilities with these large screen readers. This is a false hope, people — a Hail Mary.