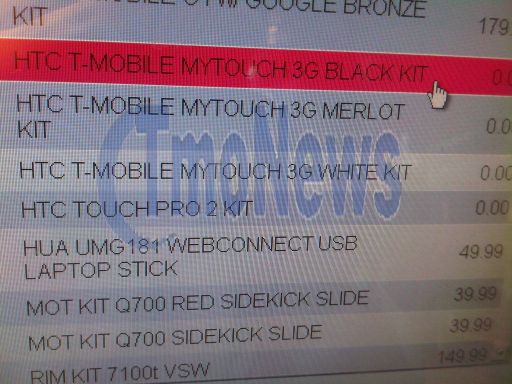 Oh, inventory systems. You’re the source of countless pre-release confirmations, open to anyone with a polo bearing the proper logo.

T-mobile hasn’t (officially) confirmed the HTC Magic was heading to their shelves, but it’s been pretty much undeniable for the past few weeks. Now, according to this leaked shot obtained by TmoNews, it’s already in the inventory system.

That’s all fine and dandy, but there’s some bad news. You remember that T-mobile survey that was weighing opinions on 3 possible names for the HTC Magic just a few weeks ago? They picked the worst one. HTC G3, T-Mobile Genius, whatever – those would have been fine. But “myTouch”? Seriously? Look, T-Mobile: Apple doesn’t call the iPod Touch the “iTouch” for a very specific reason. On the upside, it looks like HTC might have snuck in an extra color for T-Mo: Merlot. Everyone will think you’re super classy until you start talking about “myTouch”. Then you’ll just be creepy.