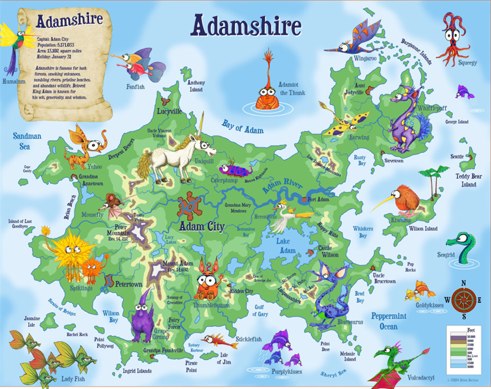 As a four-year-old, Brian Backus became captivated by the children stories told by Dr. Seuss, a neighbor of Backus’s aunt. According to Backus, Dr.Seuss’s tales inspired him to join the world of cartoon storytelling years later as a producer at Disney Interactive. Now, Backus is launching Kidlandia, web destination where parents and kids can create personalized cartoon fantasyland maps named for the people and places that tell a child’s personal story.

Kidlandia lets parents and kids create maps of a fantasy land, where the child is King or Queen of their own eponymous fantasy kingdom such as “Leenatopia” or “Michaelland.” You can insert family members or friends names into the map, so other areas of the land incorporate family members’ names. The map also features whimsical characters from horned Uniquills and scowling Grumps to long-trunked Yuhoos on the map.

Once created online, parents can order prints of the map for the child, which range from $40 for a small sized scroll to $180 for a larger sized, high quality, framed print of the map. Parents can order the maps to be printed on scrolls, that are easy for the child to carry around, or on canvas that is stretched over a frame to be hung.

Backus says that Kidlandia is driven by what he calls the “Disney Strategy,” which focuses on getting parents and kids emotionally involved with characters and a story line and then merchandising products about the characters and stories to kids who want to integrate the tales into their everyday lives. In Kidlandia’s case, each map tells the child’s own fantasy story, a personalized family story. Backus plans to add additional merchandise to market, including stuffed animals and puzzles. Backus says that there is tremendous revenue potential in fantasy games and toys for children and is hoping to share in a market where Disney makes billions each year.

Investors in Kidlandia include Josh Felser, former CEO of Crackle; Kent Lindstrom, a Friendster exec; and Dave Samuel, founder of Crackle and Spinner.

Kidlandia is a creative idea and the price points for some of the maps are fairly reasonable. But there doesn’t seem to be any integration with the web to create a virtual world for kids alongside the product, which doesn’t make the site very interactive. Webkinz and Disney’s Club Penguin create virtual worlds for children to immerse themselves in a fantasy land, and have become increasingly popular. 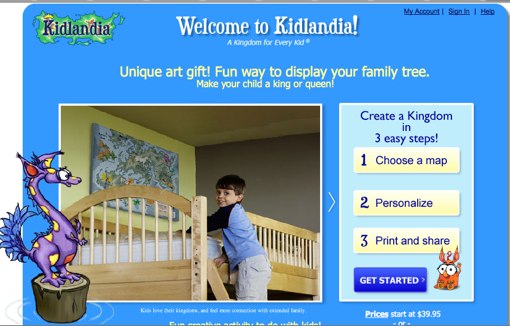