As a service whose sole purpose is to track the applications that people actually use on their systems, it should be no surprise that Wakoopa has a lot of interesting usage data. On a day to day level, Wakoopa’s data is good, but it’s the aggregate data over long periods of time that can be really meaningful to show how we are using our computers. Today, Wakoopa has released the first such aggregate data with its inaugural State of the Apps report.

The report shows the quarterly data for desktop software, games and web apps. The data comes from the over 75,000 Wakoopa users that have installed the desktop tracking software to enable the company to see actual usage. These users have logged over 525 million hours of app usage, across over 200,000 apps.

Some key trends that Wakoopa highlights in its report include:

But some of Wakoopa’s charts in the report contain even more interesting information. For example, while Chrome has an impressive showing across the board, Mozilla’s Firefox browser is even more impressive. It is the number one app on both Windows and Mac platforms. And in every continent besides Africa, it’s over 60% usage among web browsers — and in Africa it’s still at 50%.

Meanwhile, Africa is the only continent where Internet Explorer finishes as the second most-used browser. On every other continent,  IE is in third place among browsers — or worse. While that may sounds a bit ridiculous given that IE is still by far the biggest browser worldwide in terms of market share, that has to be very troubling for Microsoft as it’s probably safe to assume that a lot of Wakoopa users are early adopters of technology and could signal a trend of where things could go for the general population in the coming years.

Also not a good sign for Microsoft: The older you are, the more likely you are to use IE. In the youngest age group, 11 to 20 year olds, even smaller browsers like Opera beat it. IE has been losing market share at a steady pace for the past several years. 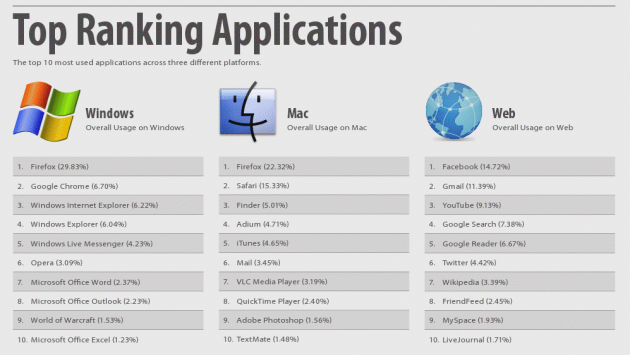 Google products dominate the top-used web apps. Gmail is #2, YouTube is #3, Google Search is #4 and Google Reader is #5. It seems pretty surprising that YouTube and Gmail would be ahead of Google Search, but perhaps that’s because people use their built-in search toolbars rather than Google.com to start searches. Also, a commenter Kyle notes below, Wakoopa tracks how long your stay on a site as well, so you’re more likely to stay on Gmail and YouTube longer than Google Search. Regardless, Facebook trumps them all.

On Windows machines, a lot of Microsoft products appear in the top 10, which on Macs, a lot of Apple products do. That is not at all shocking.

FriendFeed usage is more than halfway to Twitter usage — though it’s not clear if that’s just Twitter.com or if that includes the various clients as well. And FriendFeed’s usage is higher among Wakoopa users than that of MySpace. Again, I’d point back to the whole early adopter thing.

It’s interesting that email peak checking time for the weekday is during the morning, around 11 AM, but on the weekend, it’s at night around 9 PM. 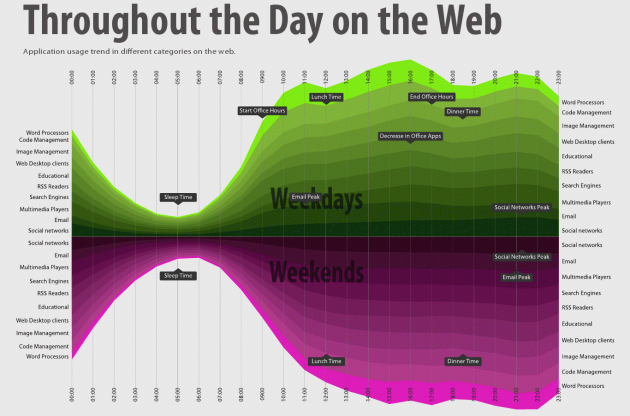 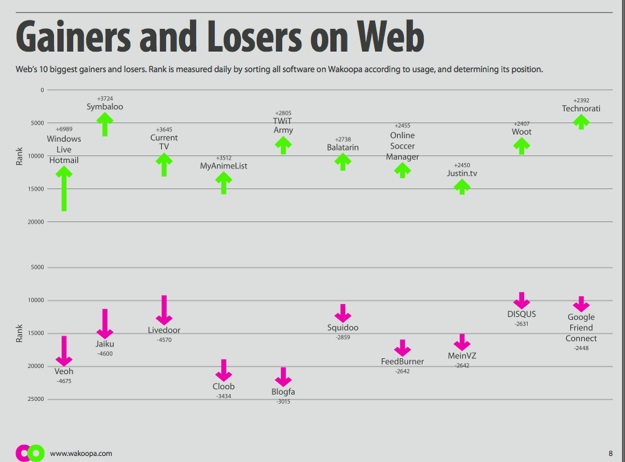