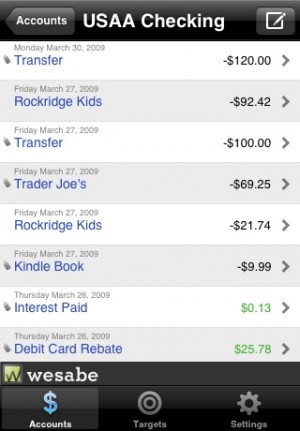 When it comes to startups in the online personal finance sphere, most people think of Mint. But another player in the space, Wesabe, has been holding its own as well, seeing some nice growth in the past year. Which one you use is probably a matter of personal taste, but perhaps you were mesmerized by Mint’s slick iPhone app. Well, now Wesabe has one as well.

So how do the apps stack up? Well, there are two key differences: Mint’s looks nicer, but Wesabe’s is more dynamic. What I mean by that is, with Mint’s iPhone app you can only see an overview of your finances, and look at things like the budget you set up online. With Wesabe’s iPhone app, everything is editable. And that’s a nice feature because more than a few times with Mint, I have seen a transaction categorized wrong, but had to login on my computer to edit it.

One cool feature that comes out of this ability to edit and add transactions from the app is that you can use your phone’s GPS to geo-locate wherever you made a purchase. This means you won’t have to type out the name of every merchant if you really want to take a hands-on approach and enter every purchase you make manually. The app also allows you to tag items on the fly, which is core to Wesabe’s offering.

If you’re really worried about security, you’re probably not going to use either of these apps. But one nice thing Wesabe’s features is a separate security layer that allows you to set a password for accessing the app. This is great if you don’t have a password set on your iPhone and worry about losing your phone and someone seeing your finances.

Wesabe’s iPhone app gives you access to all the accounts you set up online through the service. Unfortunately, while you can sign up for a Wesabe account through the app, you cannot import any bank accounts or credit card accounts through it — you’ll have to go to a computer to do that. Wesabe CEO Marc Hedlund tells me that functionality will be available in an upcoming release of the iPhone app.

Ultimately, the choice of which app you’re going to use on the iPhone will come down to which service you use. But if you’re deciding which to sign up for and being able to edit your finances easily on a mobile device is important to you, than Wesabe may be a good choice.

Find the Wesabe app available for free in the iTunes App Store.