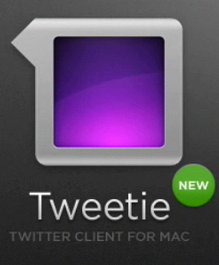 Today sees the public launch of Tweetie for Mac, the desktop-based big brother of what many (myself included) consider to be the iPhone’s best Twitter client. I’ve been playing around with a beta version of the app for the last few days since my initial preview last Thursday, and I’m happy to say that my enthusiasm for the application hasn’t waned. It’s sleek, it sweats the small stuff, and it’s going to be my Twitter client of choice for the foreseeable future. But it isn’t perfect, yet.

First things first. If you’re one of the so-called ‘power users’ who rely on TweetDeck’s custom grouping features, Tweetie probably isn’t for you. The application goes well beyond most basic Twitter clients in terms of functionality, but it isn’t an uber-dashboard that’s going to take up an entire monitor. If you’re okay with that, read on.

At first glance, Tweetie is deceptively simple. The client consists of a single column displaying your latest stream of incoming Tweets, with four icons arranged on the left side where the majority of navigation takes place. Each icon is self-explanatory for anyone who has used the service before: an ‘@’ symbol represents replies; an envelope is for direct messages; and a magnifying glass for search. Navigating beyond this main menu, everything is intuitive – double clicking on a user name takes you to their most recent tweets, clicking on a hashtag runs a search for it, and so on.

The application’s real appeal lies in the details. Every time you click to open an image from services like TwitPic, the app displays the picture in a nifty popup rather than opening a full web browser. To post one of your own images, you simply need to drag and drop it from the desktop into the Tweetie window. The app also supports global hotkeys (you can activate Tweetie with a shortcut even if you’re working in a different application). And from an aesthetic standpoint, everything looks great: navigating between sections activates a smooth transition, you can ‘endlessly scroll’ through tweets as the app continuously downloads new ones, and the interface is very clean. Also a big plus: Tweetie supports multiple accounts, which even some of the ‘power’ apps don’t do properly.

And while the app doesn’t offer a true columned UI, it does offer a compromise: Tweetie allows users to break search queries into their own windows, which I actually prefer to having one giant unwieldily window taking up my screen. That said, a few of the navigation options are a little awkward, and the application will feel foreign for the first few days that you use it, especially if you’re coming from a multi-column client like TweetDeck.

Aside from the initial foreignness, Tweetie does have some issues that may confuse new users. For one, while the app allows you to create as many new windows as you’d like for searching, they’re confusing to activate (you need to click the search button, then go to the menu bar and hit ‘open new window’) and there’s currently no way to pop out the ‘@mentions’ or ‘direct message’ columns into their own windows (this is coming in version 1.1). The option to ‘follow’ a user is tucked away in a drop down menu when it should be more prominent. And there’s also apparently no auto-complete for Twitter handles, which can make responding to friends frustrating. Minor gripes to be sure, but in an app with this much polish they stick out.

For a long time I’ve been looking for a Twitter client that felt like it actually belonged on the Mac, and frankly I haven’t had much luck. Twitterific offers a native client, but it is fairly basic. So I turned to more robust clients like TweetDeck, and more recently Seesmic Desktop, which are both very powerful and have a dizzying array of options. But my fundamental issue with both of these apps is that they’re built on Adobe’s AIR platform, which seems to invaribly lead to excessive resource usage on my Mac, not to mention weird UI quirks. I’ve hardly been suffering, but they’re nuisances that have continuously irked me and I’m glad to be rid of them. Tweetie isn’t for everyone, but I suspect its mix of power and simplicity will appeal to quite a few people, particularly those who find other Twitter clients intimidating.

Tweetie is available for free with advertising, or for $14.95 for an ad-free version (it will jump up to $20 in two weeks). If you are on a Mac and crave your multiple columns, be sure to check out Nambu, which I’ve also enjoyed using for the last few weeks.