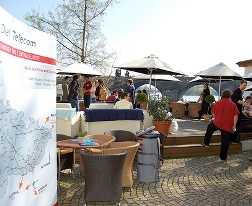 So I was in Prague for the weekend together with CrunchGear’s John Biggs, in an effort to learn more about the Czech tech scene first hand. The organizer of the event, dubbed PragueCrunch, was Jack DeNeut from Nelso, an American who has been living there for the past 16 years and is extremely well connected with the local community. When we weren’t enjoying the great weather on the terrace, the awesome local beer or cuisine, we engaged in a lot of conversations with Czech entrepreneurs and learned a lot, so a big thank you to Jack for hosting the event. Also big kudos to all sponsors for making it possible! For pictures, check out the tag PragueCrunch on Flickr.

Here are some of the most interesting people and companies I met at the event:

Learn10, which is essentially a social platform for learning the basics of foreign languages quickly and smoothly. I liked what the company is doing so much that I’ll share more information about what it is and where it’s going in a separate post later.

I ran into Rich Hensel, Prague-based frontend developer for Silicon Valley startup iWidgets, which recently raised $4.1 million in funding, and recorded a short interview with the man.

Another interesting conversation I had at the event was with Roman and Michal, the two Czechs behind local real estate portal Zeality.cz, a freshly launched web service that basically approaches the real estate listings market with a very map-centric, personalized experience. Video interview:

I was amazed with the growth of and concept behind Geewa, a social multiplayer gaming platform which Leena covered not too long ago. I expect we’ll be hearing more from this company in the future, despite the fact they’re up against a lot of competition in a congested space.

Then there’s meebee, a startup which aims to launch a new web service (currently in private “beeta”) that is supposed to ‘make meetings easier’. From the website: “meebee uses the devices and apps you already use: your email accounts and your calendars, and helps you organize meetings with your friends. Best of all meebee will contact you about meetings, in the way you prefer i.e. vie email, or on your iPhone, or via SMS, even on Facebook.” Check out the video demo on the website for more information.

Some of you may know from my earlier coverage on TechCrunch and some of my own tweets that I’m a big fan of 360 Cities, a global community of panoramic photographers who share the best 360 degrees shots with each other (and you) on the web. Founder and CEO Jeffrey Martin was at the event too, and besides taking this awesome shot he got in front of my Flip camera to answer some of my questions:

Other stuff coming to the web all the way from the Czech Republic and worth checking out:

It was also nice chatting with PragueBob, an American expat who’s been living in the city for quite some time. The man amassed over 42,000 followers on Twitter just by being himself, so naturally I asked how that came to be:

Finally, it was good to meet representatives from Ataxo, a 200-employee strong interactive marketing agency that’s quickly expanding in Central and Eastern Europe, and the main sponsor of the event, Dial Telecom, which provides voice, data and Internet services in the entire Czech Republic.

Hope I get invited to the next one!