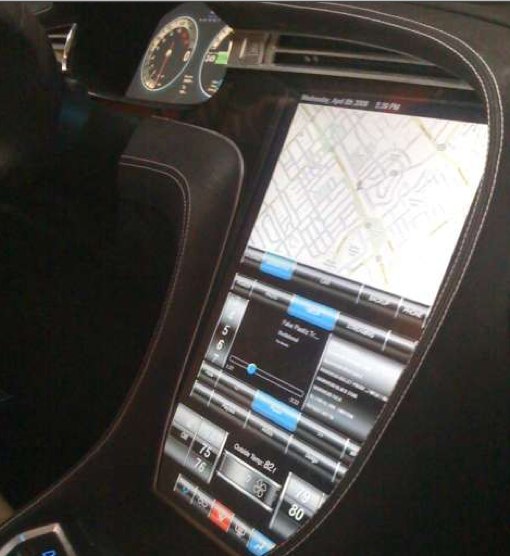 Mike and I were the first journalists to ride in the new Tesla Model S sedan yesterday and we were captivated by the massive 17-inch touch screen (so was Gizmodo) featured in the center console of the car. Both Tesla CEO Elon Musk and chief designer Franz von Holzhausen didn’t say much about the on screen system, except that it does have touch capability, it is an “entertainment center” and that it is a prototype which is still undergoing changes and improvements (see what both Musk and von Holzhausen said in our video). 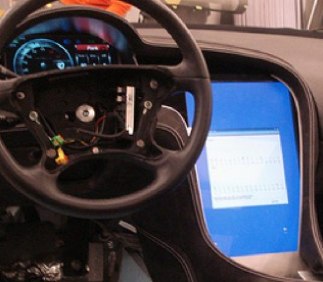 Tesla says that 520 S Model all electric sedans have been reserved by customers in first week since it was announced. At that announcement, Tesla debuted the screen but it wasn’t much to look at (see right). Now it looks much better (Thanks to Nik_Nik for the picture above).

Here’s what we know about the screen. Its a 17-inch LCD touch computer screen that has 3G or wireless connectivity. When we were in the car, the screen featured Google Maps. Tesla’s website verifies that the screen will be able to feature sites like Google Maps and Pandora Music. From what we saw yesterday, the screen is divided vertically into three separate areas: the maps/navigation screen, radio/entertainment area, and climate controls. The navigation screen has several tabs: “internet,” “navigation,” “car,” “backup,” and “phone.” The entertainment section has several tabs, including “audio,” “media,” “streaming,” “playlists,” “artists” and “songs.” The climate controls seem pretty standard. Our driver (see video) says that the computer is going to be run on some kind of Google Maps software and will feature a “full browser.” It’s not surprising that Google Maps is integrated into the interface, Google co-founders Sergey Brin and Larry Page are investors in Tesla. The dashboard is also an LCD touch screen. Tesla has also confirmed to us that the computer/entertainment center will be Linux-based.

Here’s the video of both Musk and von Holzhausen talking about Tesla’s computer and footage of our driver revealing more about the technology: 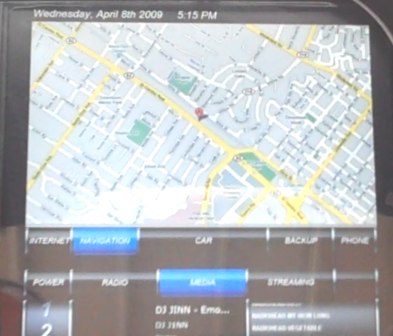 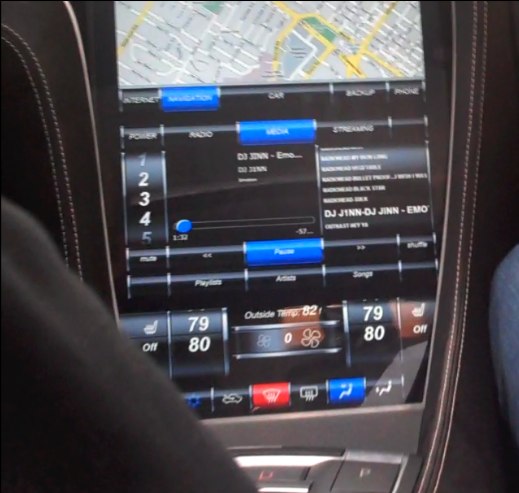