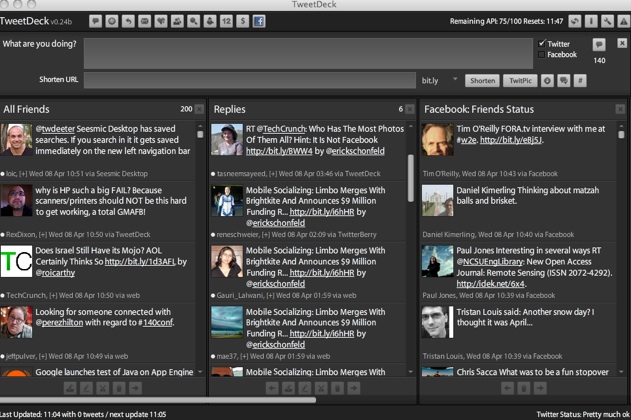 Yesterday, Loïc Le Meur announced a TweetDeck rival dubbed Seesmic Desktop that not only looks a lot like the popular AIR application (more popular than any other desktop client according to statistics) but also heavily competes with it on a feature level. TweetDeck founder Iain Dodsworth, not to be outdone by the announcements, sent an e-mail out to his contacts just now about an upgraded version of the software which should be available for download real soon (update: should be automatically pushed from now on – or get it here).

According to the e-mail, this is an unscheduled update, but it tackles one of the major issues users have been struggling with and complaining about: memory leakage. In the message, Dodsworth says he has been working closely with Adobe for a fix, but stresses that this doesn’t completely solve the problem of the app being quite the memory drain (he says this is still being worked on), only that memory usage will be capped so you can keep it turned on “day and night'” (do you?).

The new version of TweetDeck (v0.25) will also include a number of bug fixes and new features, including a Digg URL shortener, support for Spotify URLs (so you can play a song from a tweeted link directly in the Spotify player), previewing of TwitPic images inside the desktop app and preview of information about short URLs within the application before opening the link.

The biggest new feature being rolled out to everyone today is Facebook integration, so you’ll be able to view your Facebook friends’ status updates in a new column alongside your TWitter updates. You can also see when your Facebook friends are online and start a chat with them from within TweetDeck, simply by clicking their name. However, you cannot comment on their status message from within the client. This is of course making TweetDeck more a lifestreaming service than a Twitter client, so it might have to change its name if it keeps on adding integrations with other services.

Finally, you can now record and share short videos directly from TweetDeck thanks to an integration with 12seconds (a Seesmic competitor). Both the Facebook and the 12seconds integration were already included in test releases, but as of today they’ll be included in the full beta version of the app.