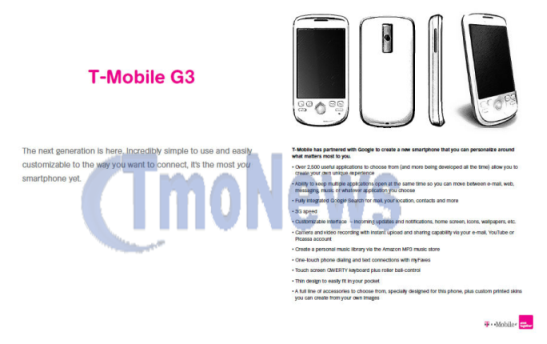 With T-Mobile-branded Dreams making accidental appearances and FCC filings abound, it’s pretty much inarguable that the HTC Magic is coming to ol’ Magenta. Seeing as it’s the second T-Mo Android phone and borrows much of its aesthetics from the G1, you might assume that T-Mobile would be branding it the G2; call the HTC Magic the “G2” around an HTC rep, however, and they’ll probably chew your head off.

With good reason, it seems. If the customer survey slides a tipster sent into TmoNews are legit, “G2” might not even be a name option – but “G3” could be, along with “T-Mobile Genius 3G”, “T-Mobile myTouch 3G with Google”, and “Prism 3G with Google”. “Prism” doesn’t strike us as being even remotely relevant, and “myTouch” is about cheesy as names comes. If they’re going to stray away from the sequential G naming scheme, “Genius” isn’t too shabby.

We do wonder, though: What happened to the G2?