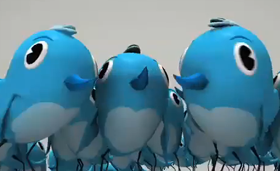 Twitter has been regularly featured on a number of television shows for some time now (I’ve always found CNN’s anchors to be a bit too enamored of the service), but this looks like the first time it’s been featured prominently in a commercial. As Biz Stone writes in the Twitter blog Sprint has just released a new ad called “What’s Happening”, during which an announcer spouts off a number of totally made-up statistics describing how people are using the Sprint network.

Nestled in the middle of the ad, the commercial’s speaker states “233,000 people just Twittered on Twitter. 26% of you viewing this have no idea what that means” as a few dozen 3D blue Twitter birds fly around. I think the 26% figure is on the low side (many people who hear about Twitter every day still have no idea what it really means, and some people who have actually used the service still don’t really get it). But those 3D birds sure look cool.

Oh, and that phone shown at the end? That’s a Palm Pre.

Unfortunately Twitter doesn’t seem to be coping too well with its growth at the moment. The service was well known for its shoddy performance during the first half of 2008, but it has become quite stable since then (coping admirably with such large events as the Election). But in the last two days it has been reverting to its old ways – yesterday users noticed as they lost avatars and messages, which brought the service down for about an hour. This morning more issues are popping up with delayed tweets and errors. This is one of the first times that Twitter has really faced extended issues since it really started approaching the mainstream.