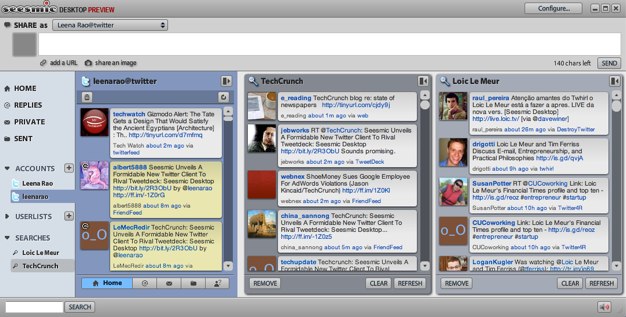 I’m live blogging from video conversation platform Seesmic’s headquarters, where Seesmic’s founder Loic Le Meur, is previewing a new Twitter client. We reported earlier about the unveiling of the site. Le Meur says that this is still a work in progress and ongoing changes will made to the product.

Here are a few of the nifty features Seesmic Desktop will have:

Multiple Accounts
Not only will you be able to see multiple Twitter accounts in one place, but you will be able to view the window in columns (similar to Tweetdeck). With this timeline, users can easily see Tweets and messages from multiple accounts and easily organize different applications. Le Meur says the interface is as simple as a Gmail interface.

Lists
You will be able to group your social contacts into lists like family, co-workers and friends.

Photos and Video
Like Twhirl, you will be able to share photos (integrated with TwitPic) and record and share video via Seesmic (that feature will be coming soon, Le Meur says). You can also drag and drop an image into messages. You can import video via your web cam as well.

Support for Social Networks
Currently the client only serves Twitter but Le Meur says that eventually Seesmic Desktop will have integrate with Facebook, Digg, Identica, Ping.FM and FriendFeed. Twhirl currently has support for these networks.

Stability
Because Seesmic Desktop is built on the stability of company Seesmic’s platform and Adobe Air, Le Meur says that his new client will be much more stable than competitor Tweetdeck.

Search
Search queries of messages opens in different columns and are saved.

This new client is like an upgraded, stronger Twhirl with even more powerful capabilities. According to LeMeur, Twhirl has been downloaded 1.2 million times and is the leading Twitter client on the web. Twitstat says that Twhirl is the 4th most popular Twitter client, behind rival Tweetdeck, which ranks as #2 on the list. But this new app could overtake Tweetdeck with its new functionality. Its actually similar in some ways to AlertThingy. Le Meur wants this client to be the Bloomberg of social software, aggregating all content into one (free) desktop app, perhaps becoming the desktop app version of FriendFeed along the way.

Disclaimer: TechCrunch editor Michael Arrington is an investor in Seesmic, although I am not. 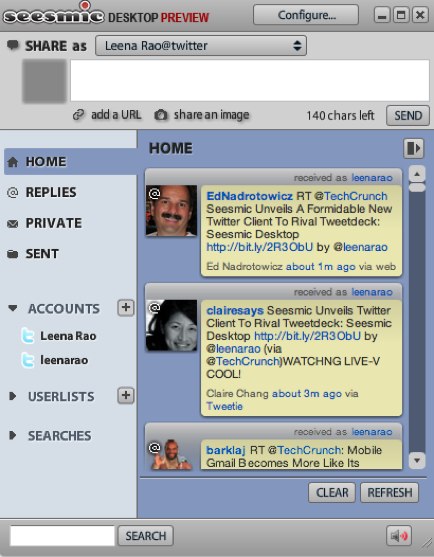