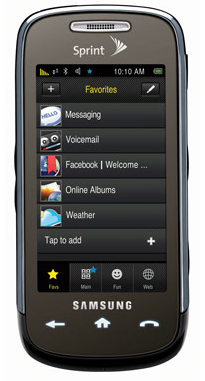 Tucked away in a Korean press release alongside the likes of the long ago announced Samsung Behold, Memoir, and Omnia HD was one little gem we’d yet to have seen in any official light: the Instinct S30. Of course, it’s not the first time we’ve ever seen it – but it’s nice to know it wasn’t some incredibly elaborate hoax put on by some crafty gent just looking to crush the spirits of Instinct fans everywhere.

Besides the press image to the right, confirmation of a 3.2″ touchscreen, and word that they’ll be showing it at CTIA 2009 this week, there’s not much to glean from the release – but if you wanna dig around it yourself, the full translated version is hiding right behind the jump.

Samsung Electronics, April 1-3, Las Vegas United States in the exhibition ‘Touch for Every Lifestyle’ to the theme of large-scale exhibition of 253 square meters will be installed.

□ variety of markets to strengthen the lineup pulteochiseukeurinpon

At the show, Samsung Electronics, AT & T, Verizon, Sprint, T-Mobile, including four U.S. carriers will be available through a variety of products will pulteochiseukeurinpon.

First, Samsung’s horizontal QWERTY slide keypad, plus a premium pulteochi mesijingpon ‘impeuresyeon (Impression)’ will be released for the first time. Slated for release next month, ‘impeuresyeon’ AMOLED LCD is 3.2 inches on the 300 million pixel camera, Bluetooth, and is equipped with various advanced features.

Blast from the U.S. market last year caused the pulteochiseukeurinpon ‘inseutingteu of the follow-up model’ inseutingteu S30 ‘is also notable. ‘Inseutingteu S30’ 3.2-inch screen and apply the design to the luxurious raundeuhyeong jeonjakin ‘inseutingteu the evaluation has had a floor upgrade.

Samsung Electronics, during the exhibition period, the mobile WiMAX, LTE and next-generation communications technology will be massive.

Samsung Electronics, a variety of mobile WiMAX base stations and handsets in the lineup this year as being a commercial artist in the United States and Latin American markets will be plans to expand the Mobile WiMAX market.

Samsung’s first exhibition in a high density of population in the use of the large base station equipment from the line and mobile WiMAX ultra-small base stations pemtosele MID, mobile phones and Wi-end Mac and a variety of sponsor and demonstrate mobile WiMAX service plans.

Various marketing activities aimed at U.S. consumers will be massive.

Venue for free over the phone, and digital devices that can recharge your Samsung mobile charging station ‘(Samsung Mobile Charging Station) to install.

Samsung Electronics will also be held in Canada, Toronto’2010 Winter Olympics’ official sponsors of the wireless communications sector as a Samsung-sponsored with the former Olympic torch in 2010 to display the Olympic emblem and mascot of the corner as a separate pre-marketing activities and the Olympics plans together.

Samsung Electronics, the success of a business phone, and a variety of specific strategies based on the specific marketing three-quarter and 4 percent respectively last year, 21.9%, 23.7% of the market and the North American mobile phone market as the No. 1 vendor has deunggeukhan. The growth of these markets due to its status as market leader this year and plans to strengthen.

‘CTIA’ exhibition in the world, more than 100 countries, 45,000 people visited the exhibition which is North America’s largest communications specialist. Samsung Electronics and Nokia, Motorola, Alcatel, Lucent, and more than 1200 people participated in the global telecommunications companies demonstrated new products and technologies in a variety of communications, said.
> swap