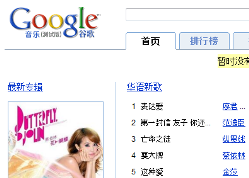 Google China has taken the beta label off its dedicated, free MP3 search engine now that the local Google branch announced deals with all four major music labels (Warner, Universal, EMI and Sony) at a press conference earlier today. The website, which had been in beta for over a year, can be found here, or you can try the translated version (note that you won’t be able to download or listen to songs outside of the country).

The site offers over a million music tracks thanks to a partnership with Top100.cn (a company co-founded by basketball start Yao Ming which Google has invested in), most of them Chinese but also foreign tunes approved by the government. For example, users can download the latest Metallica album free of charge, of which you can see a screenshot below. Apart from the four labels mentioned above, several major publishers and 140+ indie labels are said to be on board. 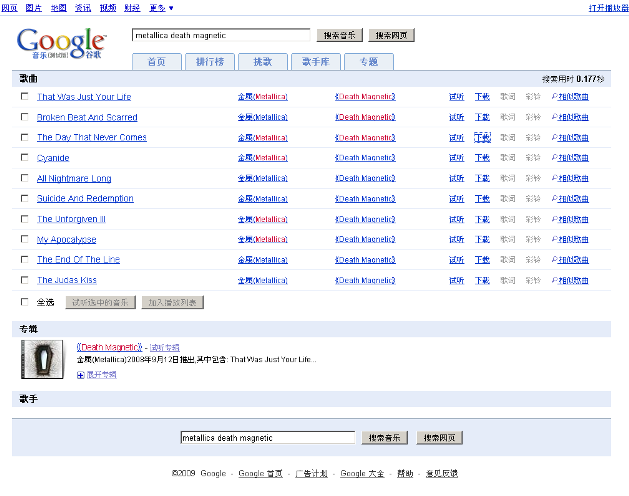 Google will share ad revenue sold on the music site, generating sales for record companies in a market where 99% of all downloads are illegal, according to the International Federation of the Phonographic Industry (IFPI).

Google is making this move to gain more ground on Baidu, the leading search engine in China, which has been offering free MP3s for years, part of the reason why it became the leader in the first place (it has roughly double the market share in search than Google). A Baidu representative has already responded to the launch of the new MP3 search engine, saying Google is entering the game too late and that this particular ship has long sailed.

The niftiest part of the music search engine is the Songscreener, an innovative way to discover new tunes based on your current mood and more specific details like the tone, timbre, age, language and genre of music you would like to explore. Google is also said to be experimenting with a voice search feature for the music search engine.

The company has no plans to expand the service outside of China, a representative told Reuters.