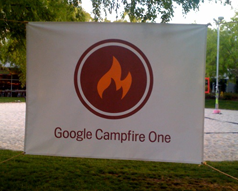 Google is holding one of its occasional “Campfire One” events for developers on April 7. These events, which are held outside on the lawn at Google Headquarters, have always included big product announcements in the past. At a May 2008 Campfire One Google announced details of Friend Connect. A month before that, in April 2008, Google announced App Engine.

What will they announce this time? A good bet is Java on AppEngine, which we’d previously heard wouldn’t be announced until the I/O conference in May. But the product would be a good fit for Campfire One. Of course, it may also be something else entirely. We’ll attend (either because we’re invited or because we just show up) and live blog whatever it is that happens.